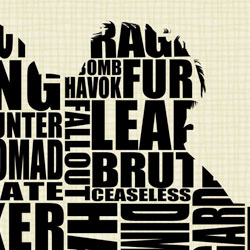 The last teaser of the week from Marvel for its Fear Itself panel at San Diego Comic Con. What does the lack of special characters mean for the Hulk?

So far, the previous four images reveal the phrases:

The other images had the word Defender buried in the text, this one has Offender instead.