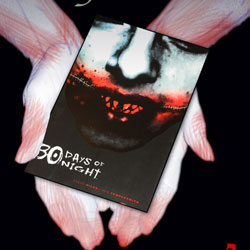 IDW Publishing is daring fans to switch to a vampire franchise with some teeth! This year at San Diego Comic-Con, in an unprecedented promotion, fans can turn in any copy of a Twilight book or graphic novel at the IDW booth #2643 for a free copy of a 30 DAYS OF NIGHT graphic novel! IDW is vowing to help vampire fans get back on track with the undead the way they were always meant to be: bloody and terrifying.

“Real horror fans have watched vampires systematically turned into wimpy fodder for years now. It’s time to fight back” said Niles. “I’m happy to be working with IDW on the Sparkles for Blood event. Hopefully, working together we can put an end to this nightmare.” IDW’s exclusive “Sparkles for Blood” outreach program is designed to help all fans of the undead get what they really want – bloody, vampire horror. Sprung from the twisted minds of Steve Niles and Ben Templesmith in 2002, 30 Days of Night graphic novels and major motion pictures offer vampires as the feral, animalistic creatures that stalked humans under cover of night that they really are.

“Recently, vampires in pop culture have started to swing back to the romanticized vamps of other literature and films before 30 Days of Night,” said IDW chief creative officer, Chris Ryall. “In some cases, they’re even being treated more as chaste immortal teenagers than as the murderous creatures that they are. ‘Sparkles for Blood’ will remind everyone that vampires are creatures of the night, not of the twilight.”

As part of the book-swap being offered to fans at Comic-Con, everyone who receives a 30 Days of Night graphic novel in trade for their sparkly novel will also receive information about the coming 30 Days of Night ongoing series. Written by 30 Days co-creator Steve Niles, with art by acclaimed artist Sam Kieth, this first-ever ongoing 30 Days of Night series kicks off very appropriately in October.

“We may need a forklift at the end of the show, for all the Twilight books,” says Dirk Wood, IDW’s director of retail marketing. “But it will be worth it. It’s time to start scaring people again.”

Every lapsed 30 Days of Night fan and sparkly vampire purveyor is invited to the IDW Publishing booth #2643 at Comic-Con to get back on the straight and bloody path. Steve Niles will be in attendance and signing at the IDW booth every day.

Suggested Wood, “Come swap out your Twilight books and get a needed blood transfusion in your reading habit.”