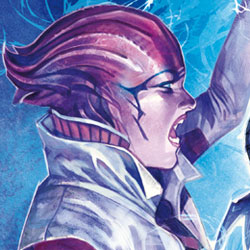 With a story by Mass Effect lead writer Mac Walters and an original script by John Jackson Miller, best known for his work on Star Wars: Knight Errant, and art from Omar Francia who also did work on Star Wars: The Force Unleashed 2, Mass Effect: Invasion focuses on Aria T’Loak, a self-appointed queen of Omega, a space station catering to the galaxy’s underworld. T’Loak is a key figure in the Mass Effect universe and must defend her territory from a terrifying new threat unleashed by the pro-human black-ops organization Cerberus. Mass Effect: Invasion will launch its first issue this October.

“When I started collaborating with Dark Horse for Mass Effect: Invasion, my first choice was to base the story around Aria, one of my favorite characters from the series,” Mac Walters explained. “She was even more fun to write for in comics and has resulted in creating the most action-filled, intense Mass Effect comic to date.” Since 1986, Dark Horse Comics has proven to be a solid example of how integrity and innovation can help broaden a unique storytelling medium and establish a small, homegrown company as an industry giant. The company is known for the progressive and creator-friendly atmosphere it provides for writers and artists. In addition to publishing comics from top talent like Frank Miller, Mike Mignola, Neil Gaiman, Gerard Way, and comics legend Will Eisner, Dark Horse has developed such successful series as The Mask, Timecop, and SpyBoy. Additionally, its highly successful line of comics and products based on popular properties includes Star Wars, Indiana Jones, Buffy the Vampire Slayer, Aliens, Conan, Emily the Strange, Tim Burton, Trigun, Serenity, and Domo. Today Dark Horse Comics is the largest independent comic-book publisher in the US and is recognized as one of the world’s leading publishers of licensed comics material.

For more information on BioWare, visit www.bioware.com or follow us on Twitter at www.twitter.com/biofeed. To join the millions of fans already registered on our community, go to http://social.bioware.com.

Electronic Arts (NASDAQ:ERTS) is a global leader in digital interactive entertainment. The Company’s game franchises are offered as both packaged goods products and online services delivered through Internet-connected consoles, personal computers, mobile phones and tablets. EA has more than 100 million registered players and operates in 75 countries.