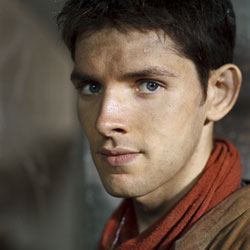 SyFy and the BBC have released the panel presentation notes for Merlin, which takes place on Sunday at the San Diego Comic Con.

The hit Syfy/BBC series MERLIN returns to Comic-Con with a special panel on Sunday, July 24 at 1:00 p.m. in the 2,000-seat Room 6BCF. Featured panelists are Anthony Head (Buffy the Vampire Slayer, Free Agents) and Colin Morgan, who play King Uther and Merlin, respectively, and Merlin executive producers and co-creators Johnny Capps and Julian Murphy, as well as first-time Comic-Con attendees Bradley James and Katie McGrath, who play Prince Arthur and the villainous Morgana. The hour-long panel will include Comic-Con exclusive “first look” footage of the upcoming fourth season of MERLIN, as well as inside information from the cast and co-creators. There will be Comic-Con exclusive goodies for all fans in attendance, as well as extremely limited edition prizes awarded to some lucky audience members. Jenna Busch, host/writer for Moviefone, Screen Junkies, She Knows and more, will moderate the panel. The series is currently filming its fourth season in Wales and France.