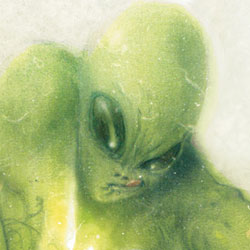 For all your addictions of the extraterrestrial variety, from wild conspiracy theories to late night encounters with probes, the XENOHOLICS are here to help! In October, writer Joshua Williamson (DEAR DRACULA) and artist Seth Damoose (I HATE GALLANT GIRL) will offer their tongue-in-cheek support group to the masses by way of a new series from Image Comics and Shadowline.

Dan Duncan is contributing painted covers that make even little green men look good, and Damoose provides quirky, charismatic interior art with lots of personality and animation. Williamson promises that XENOHOLICS, as USAToday put it, “won’t be a book that skimps on the out-of-towners.”

“XENOHOLICS is about aliens and I didn’t want it to be one of those books where the aliens are only hinted at,” Williamson commented. “But aliens aren’t the only stars! There are also the crazy people who believe in them. I’ve always been fascinated with people who claimed to have been abducted or believe with all their hearts that aliens are out there… watching us. This is their story as they get thrown into a larger conspiracy, and we get to see how they react to it. Our main goal was to take the alien genre and spin the clichés on their heads, creating without a doubt the weirdest book I’ve ever written.”

“XENOHOLICS will do for aliens what CHEW did for cannibals,” said Shadowline Publisher Jim Valentino. “It’s smart, funny and surprising. A perfect addition to Shadowline’s commitment to excellence in diversity and, I believe, our next hit.”

Believe it or not, aliens are only the tip of the iceberg when it comes to conspiracies in this laugh-out-loud comic! While the XENOHOLICS may be there to help each other, it appears that not everyone in the group is being entirely honest about their encounters. Once readers have been introduced to XENOHOLIC’s motley crew of alien addicts, they’ll wonder, will any of these nuts ever be able to prove that aliens do in fact exist? XENOHOLICS #1, a 32-page full color mature comedy comic book that will appeal to fans of CHEW and BOMB QUEEN, will be available for order in the August issue of Previews Catalog and goes on sale October 19, 2011 for $3.50.