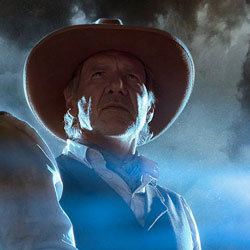 SDCC’11: Arcana and Platinum team for Cowboys and Aliens at SDCC

Arcana Comics is pleased to announce that at booth 2415 at San Diego Comic Con from July 20th – 24th, you will find not only Arcana Comics, but Platinum Studios’ Cowboys and Aliens. Cowboys and Aliens was created by Scott Mitchell Rosenberg and published by Platinum Studios in 2006 and was the number one graphic novel in America when it was released. Back in 1997, the graphic novel outline was snatched up by Dreamworks and Universal pictures.

The film adaptation has received a lot of buzz since it was first announced due to its original concept as well as some of the talent tied to the film. Brian Grazer, Ron Howard, Kurtzman, Orci, and Rosenberg are producers, while Steven Spielberg, Jon Favreau, Denis L. Stewart, Bobby Cohen, Ryan Kavanaugh, and Randy Greenberg are executive producers.

At booth 2415 (Arcana Comics), you can meet the creator of Cowboys and Aliens, Scott Mitchell Rosenberg, pick up some Cowboys and Aliens merchandise as well as other Platinum Studios’ books. On the Arcana side of things, look for exclusives, graphic novel deals, and plenty of surprises across the board!

Don’t miss the premiere of Cowboys and Aliens on Saturday night, July 23rd, in San Diego and if you want more information on some of the special events associated with the film and Platinum Studios, become a fan of Platinum at http://www.facebook.com/PlatinumStudios.

Arcana Panel at SDCC 2011
If you are at San Diego Comic Con this year, be sure to attend the special Arcana Comics panel on Thursday night! From 6:00 PM to 7:00 PM on Thursday, July 21st in Room 23ABC, meet Arcana owner Sean Patrick O’Reilly (KADE, CLOCKWORK GIRL, WINGMAN, PIXIES), Erik Hendrix (SIDESHOWS), Mike Kalvoda (BANSHEE, STRAW), Brooke Burgess (BROKEN SAINTS, BECOMING), Matt Wilson (SCROOGE AND SANTA), Ryan Colucci (HARBOR MOON), and special guest Josh Blaycock (Devil’s Due). We will take you through some of the amazing talent coming out of one of the world’s largest graphic novel producers. With over 150 graphic novels released, find out what the publisher currently has coming in the near future and get a sneak peak at the 3D animated feature film Clockwork Girl, Arcana’s slate of interactive apps, and more. See how independent publishers make their mark in the comic book industry and blur the lines between mediums, Arcana style. Attendees will get free comics and the first in a series of Arcana Universe posters