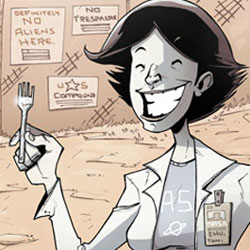 Having had enough of the top cibopath at the FDA, Director Applebee is able to pawn Tony Chu off to NASA for a very special assignment. Have you met Toni Chu? Previously in Chew: The sky is on fire with giant flaming alien writing, and it has plenty of people freaked out.

The organization known as E.G.G. is ready to assassinate anyone and everyone in power until the real truth about the Avian Flu and Aliens is released, and they’re unleashing their manifesto on the world right in the middle of Chow Chu’s big comeback.

Or they would have if those events were actually allowed to transpire.

I really like how Layman sets up a really great story idea, and then totally pulls the rug out from beneath the reader’s feet by revealing how that plot was foiled before it even began thanks to the efforts of Tony and Toni Chu. And, since we don’t know what is going on with the writing in sky, tying a trip to Area 51 and a crazed fanatic who is making bullets from meteors to sell to E.G.G. It’s a fun trip through the conspiracy file, and discovering Toni’s big secret, and her brother’s willingness to cover for her, turns this issue into a nice family affair.

While I enjoy the heck out of what Layman and Guillory are doing with Chew, the jump ahead stunt last month has me out of the loop with the Flambe story, so it took me a bit to get the old tubes warmed up to remember the storyline. Other than the delay, this was a very fun read.

I really enjoy Rob Guillory’s art in this series. While it isn’t the type of art I generally go for in my comic books, at least Guillory is consistent in his style, which makes it appealing in a weird sort of way… In previous issues, some of the situations brought up strong violent and gory images, but thankfully the bizarre factor is toned down – if outer space babies, and dirty diapers are considered toned down – and everything works.

For $2.99, Chew is a great buy. The story is funny, well paced, and continues to bring surprises month after month. The art works really well in this series, and the creative duo of Layman and Guillory brings the win once again. Probably not the best issue to jump in if this is your first time, but for those who have been reading Chew, this is a great issue, earning 4.5 out of 5 Stars.