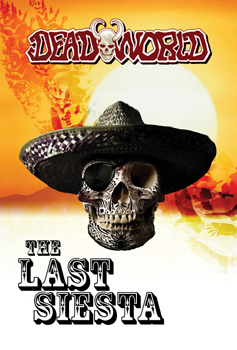 Coming in September will be a complete stand alone saga set in the realm of Deadworld in an original graphic novel released by IDW, a premier publisher of graphic novels and books.  Deadworld: The Last Siesta continues the relationship between Deadworld and IDW which in the last year has released three collections of Deadworld material in association with Desperado Publishing.

According to writer, Gary Reed, Deadworld: The Last Siesta is meant to be an entry way into the Deadworld which has been published since the mid- 1980’s with over 75 issues in print.  “It’s obvious that a lot of people are a bit intimidated by jumping into such a long running series,” said Reed, “so one of the things I thought was important was to do a new story that was self contained, complete, and set outside of the chronology of the ongoing Deadworld storyline.”   Although The Last Siesta is not part of the continuity of Deadworld, it does feature the most popular character from Deadworld, King Zombie.

The graphic novel, running 112 pages and retailing for $14.95, is on the September schedule from IDW.  Reed said that since it is a complete story released in one package, it wasn’t even solicited until the entire project was done, except for the lettering.  “The artist, Mark Bloodworth, finished it at the beginning of the year so he’s anxious to finally see it in print,” said Reed.

Reed said that the story takes place in Mexico where King Zombie heads across the border and finds himself plunged into a bitter dispute between a former drug cartel and the assassin, Raga.  “It has some of the elements of a classic Sergio Leone piece in that there are three individuals, each with their own agenda who of course, intersect with some interesting and violent results.”

The script is from Reed and Gary Francis.  Francis was the collaborator in the 1990’s with David Mack on Happy the Clown and Young Dracula.  The artist, Mark Bloodworth, is well known for his work on Deadworld as he took over after the original Deadworld artist, Vince Locke left for DC.  Bloodworth himself also left Deadworld in order to draw Clive Barker’s Nightbreed for Marvel Comics, so The Last Siesta is a return of Bloodworth to Deadworld.

Reed said that after the release of Deadworld: The Last Siesta, there will be a new serial that will have Deadworld in color for the first time.  Deadworld: Infection is illustrated by Sami Makkonen, artist of the Slaughterhouse storyline.  Infection is not yet on the schedule but Reed said that about 70 pages are finished. About IDW Publishing
IDW is an award-winning publisher of comic books, graphic novels and trade paperbacks, based in San Diego, California. Renowned for its diverse catalog of licensed and independent titles, IDW publishes some of the most successful and popular titles in the industry, including: Hasbro’s The Transformers and G.I. JOE, Paramount’s Star Trek; Fox’s Angel; the BBC’s Doctor Who; and comics and trade collections based on novels by worldwide bestselling author, James Patterson. More information about the company can be found at IDWPublishing.com.

About Deadworld
Deadworld is the long running horror series that has been published by Arrow, Caliber, Image, Desperado, and now IDW. Over 75 issues in print, it has also been optioned for film. Deadworld has a completed script by David Hayter, writer of the X-Men and Watchmen movies, and the director should be announced soon. www.deadworld.info