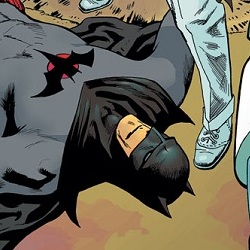 Another “Flashpoint” tie-in… Who is The Outsider? What does he want? So many questions, only so much time. Take the jump to see if this tale is worth your $2.99. Previously, in The Outsider: After Eobard Thawne aka Professor Zoom, mucked with time, he created the alternate world of “Flashpoint”. Aquaman and Ocean Master are in a war with Wonder Woman and the Amazons, Thomas Wayne is Batman, and there is this character called The Outsider, who I have never heard of before this issue. Born into deplorable conditions, and rising to a position of great power, the ambitious Michael Desai, also known as The Outsider, has a plan. But with this plan comes some obstacles. Can The Outsider accomplish his goals? Or will his lofty aspirations be his assured downfall?

NEW BLOOD TO THE DCU… BY THE GALLON.

James Robinson could, at one time, craft a nuanced, and beautiful story as he did on multiple occasions in “Starman”. But as of late, those stories have been replaced with ham-fisted and often brutal stories that are hard to get behind. This comic is sadly in that latter category. The story provided by Robinson is like a bone that has had the meat picked off of it. There isn’t much hear as far as characterization goes. There is nastiness, and ultra violence but as far as making The Outsider a interesting character, Robinson came up short. The comic offers a back-story that is conflicted, not sure if it wants the reader to sympathize with The Outsider, or fear him.

The Outsider came off as a classic James Bond villain, without the class. His motivation wasn’t clear, I couldn’t positively tell you whether his actions were for his own benefit, his peoples’, or what. All I really do know for certain is that he gets really ticked off if you mess up his coveted white dress suits. A full third of the book is a origin story that dragged its feet, and could have been handled in about three pages. The dialogue the Outsider delivers was just ill-fitting for a character in a position such as his. He is a supposed business man, but the way he phrases things, and emotes, just seems more like a two bit thug on a power trip.

I shouldn’t try to tell James Robinson how to write a character but if The Outsider had been portrayed more sinister, and evil then there would have been much more to the character. By the end of the issue I couldn’t say whether I hated, or liked the character. What was presented was so unfocused that it wasn’t really enough to judge him.

The artwork by Javi Fernandez wasn’t really that impressive, overall it felt like it was phoned in. It was hard to muster some excitement for anything past the double page spread of destruction which was the height of this issues artistic goodness. There were visual inconsistencies that ranged from hyper extended faces, to characters anatomy being malformed on multiple pages. Even within the best sequence of the book there was a odd choice by either the artist, or colorist to use something kin to a tone sheet. In this digital age, I can’t be sure who put them down, but whoever did, didn’t realize how distracting they would be. These dots do appear later on in the book, but only in small innocuous pieces in the background, not right out in your face.

The coloring for this comic tries to tidy up behind the artist, to add what the artist should have. If a nose is not depicted by the artist, then trying to sculpt one using the color pallet is not the best way to go about it. Using highlights, and other facets of coloring to correct errors in visual structure is not, a way to properly color a comic book, and in the end highlights the artists failings.

This book is straight up the middle, just like the crease in The Outsider’s skull. I expected something much better than what I got, but I guess after “Cry for Justice” I should have lowered my expectations when it comes to James Robinson. As far as the artwork for Javi Fernandez, I was hoping for something more like the artwork seen on the cover by Kevin Nowlan. But what was offered within this comic just didn’t click for me.

The world of “Flashpoint” has already been established as a harsh, and brutal world, The Outsider reinforces that with a passion. The way the characters are brutally killed in panel are just to over the top, but hey, if you like senseless violence then by all means pick it up for that alone. As far as being one of the tie-ins that run concurrent with the main story, this doesn’t really offer much expansion to the present world of “Flashpoint”, where Barry Allen and Thomas Wayne are running around gathering chemicals, and a electric chair.
In closing, Flashpoint: The Outsider #1 (of 3) receives 2.5 out of 5 stars.