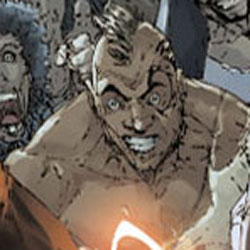 Werewolves. Why’d it have to be werewolves? Harry Dresden is up against a pack of them, and he’s got to figure out which one is the killer, and how to bring him, or them, down. Previously in The Dresden Files: Fool Moon: Mass murders have been occurring around Chicago during the full moon, which has the cops and the FBI stumped. That’s when Karen Murphy calls in her friend Harry Dresden, wizard for hire, to help the investigation.

When it comes to world building, sometimes a great deal of time will need to be spent explaining how the world and its inhabitants work. In this case, instead of Dresden narrating from a book, Jim Butcher gives readers a talking encyclopedia in the form of Bob, the skull. While I’m sure this has appeared in the prose books, I really like the insertion of this method of discovery in this issue. That being said, explaining the various types of werewolves Dresden might encounter does take up quite a bit of the issue, which in the end, leaves readers wanting just a bit more of the big story.

The issue is filled with more character development between Harry and his Special Investigation Unit friend Karen, which is nice even with all of the problems the police have with Harry on the case. There’s also a little love interest moment thrown in, which needs more explanation down the road, but for now, it’s good to know Harry isn’t focused on just one goal in life.

Since The Dresden Files takes place in a world of magic, the issue wouldn’t be complete without a few escapades, and this issue delivers as Dresden finds himself up against a street gang that also moonlights as a pack of werewolves. It’s this scene that makes the whole issue worthwhile, as we get to see the fighty-fighty, the magicy-magic, and some supernatural sleuthing that propels the story to the next chapter.

I really liked the art in this issue. And it isn’t because the women are drawn with huge bosoms and little clothing, or the men have pecks on top of their pecks that are clearly defined by their skin tight Lycra Spandex uniforms. Instead it is the use over exaggeration in the character expressions that brings life to the still image. When Dresden grits his teeth in anxious fear, it shows, and doesn’t require a word balloon with the character saying, “Oh Crap!” You see it in his face and in the way the character is posed. In Chase Conley’s hands this issue is a lot of fun visually. He isn’t afraid to draw characters that are taller or shorter than others in the panel, and he isn’t afraid to experiment with different angles – even if they aren’t always the best angle to move the story along.

If you would have told me a year ago, that I’d be eager to pick up a comic book series based on a popular series of novels about a magic detective, I’d have punched you in the face and called you a dirty, dirty liar. Be glad it’s a year later, and I’m starting to dig on what Jim Butcher and company are serving up at Dynamite Entertainment. Though werewolves are fairly tiresome foils I think this issue is worth checking out. The story moves along logically, the characters develop as the issue moves along, and the art is a lot of fun. The Dresden Files: Fool Moon #2 is worth the money and earns 3.5 out of 5 Stars.