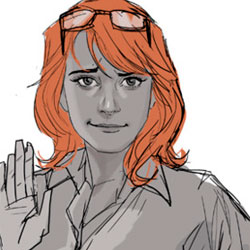 No stranger to the Art Appreciation Moment of the Day, today we have a wonderful piece by Phil Noto where he says goodbye to Oracle. Oracle 1989-2011 – My first job in comics was creating covers for DC’s Birds of Prey and and over the the course of 24 issues I drew this lovely lady a lot. And then I did some brief interior work on the Cassandra Cain Batgirl and finally did the first run of covers for the Stephanie Brown incarnation. They’ve all been great Batgirls much like Steed’s partners in the Avengers. I’ve done numerous pieces of Babs as Batgirl more so for the retro iconography and the aesthetic look of the black, yellow and red then her actual persona as Batgirl. Honestly in terms of fictional characters, I always just considered her to be Oracle. I, like many others, am very sad her to see her go, but if there’s anyone to keep her spirit alive as Batgirl once again, Gail Simone is the one to do it.