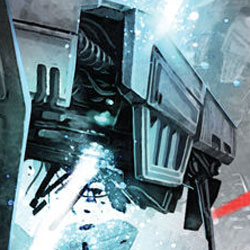 Based on a video game I’ve never played and set alongside a video game that isn’t out yet, Star Wars: The Old Republic: The Lost Suns is a half-hearted attempt at a Star Wars story. Star Wars: The Old Republic: The Lost Suns “is the first comic series set concurrently with the events of the Star Wars: The Old Republic video game” currently being worked on by BioWare and LucasArts. Other than that, I have absolutely no way to tell you who any of the characters are, whether they’ve appeared before in Star Wars lore (which I can only assume they have) and whether these characters will appear in the MMORPG we’ve all been waiting so long for.

But nevertheless, there is a story.

I’m actually pretty lost when it comes to the story, because it’s a very disjointed piecemeal attempt at a story. I get the feeling that the author hasn’t actually written comics before, and that dealing with the panels and pacing of a comic has thrown him for a loop.

The comic opens with some fighting, but it turns out only to be a story an old guy was telling, or is it? One of the characters might be the mother of the main character in this story, but he doesn’t appear until page 9.

So in the end, you have to read the whole comic once to get any idea of what was happening at the beginning of it, and even then the art leaves you struggling some more, due to the fact that the character designs sort of fluctuate throughout the book. You’re left wondering if there are two characters that look similar or one character who keeps changing hair colour and facial structure.

Not to mention the fact that there seems a real struggle for the artists to draw appropriate and consistent facial expressions and moods. Are they smiling, are they happy, are the reticent, are they sad? It’s all just a little unclear.

Only in the last quarter of the issue does the story – for me – start to be of some interest, and that’s only because we start getting into what Star Wars is supposed to be about: Jedi, villains, evil, good. Everything prior to that is, sadly, not done well enough to warrant its inclusion in the book.

In the end, this book is one that I wouldn’t rush out to get your hands on. Maybe wait for a trade to collect them all, but that’s working off the assumption that the story that emerges in the last quarter of this book continues to grow, strengthen, and intrigue. If it doesn’t, then I’d be a little hard pressed to find a reason you’d want to buy this series at all.