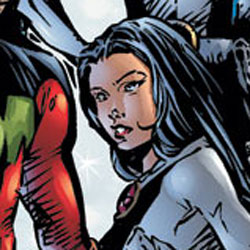 This week on the show: A Legion Lost, a Batgirl relaunched, and a Total Recall begging for a total recall.

REVIEWS
Stephen
TOTAL RECALL #2 (of 4)
32 pages FC • $3.99 • Teen +
Written by VINCE MOORE
Art by CEZAR RAZEK
Covers by DARICK ROBERTSON (main), CEZAR RAZEK (1-in-5)
“Black & White” Retailer incentive cover by DARICK ROBERTSON
Continuing the sequel to the smash hit 1990 film, Douglas Quaid and his dream lady Melina find themselves reeling after the tragic conclusion to issue #1. Yet there is no time to mourn as the Mars colony struggles to keep itself from falling apart. With more tragedy on the way, Quaid and Melina have to figure out what’s going on before all hell breaks loose. Meanwhile the mystery of Mars itself deepens, and as our heroes discover, the creation of air for Mars was just the beginning.

Rodrigo
SPACE WARPED #1 Written by Hervé Bourhis Drawn by Rudy Spiessert SC, 24pgs, FC, SRP: $3.99 COVER A: Rudy Spiessert COVER B: Rudy Spiessert
Far away, in a land long ago…there was an orphaned farm kid with daddy issues trying to rescue an orphaned princess unaware of her daddy issues! In the tradition of ROBOT CHICKEN: STAR WARS and SPACEBALLS comes a loving, affectionate parody of the greatest science fiction franchise of all time! The first of a two-issue mini-series, this is a fan-pleasing romp that skewers one of the greatest adventure stories ever!

Matthew
Secret Six #34 Written by GAIL SIMONE Art by J. CALAFIORE Cover by DANIEL LUVISI
He’s been a man of honor seeking his righteous path. But now, Bane has looked into the abyss and seen only the futility of his quest. His one lifeline has been Scandal Savage, but will she be enough to stop his descent – or has the obsession taken over Bane again?

MAJOR SPOILERS POLL OF THE WEEK
With the DC Universe Relaunch well underway, it has been announced that Gail Simone will be taking on the writing duties for the upcoming Batgirl series featuring Barbara Gordon under the cowl.  This has a fair number of people upset, and though we don’t know how the story will be presented, if DC is undoing 20 years of continuity, or what the fate of the other Batgirl is, we want to know what YOU think of the change.
FIGHT!

The Legion of Super-Heroes finds itself stranded in a distant galaxy, on the home planet of the vicious alien race known as the Progeny. While some of our heroes struggle to repair their damaged spaceship, the rest attempt to forge an alliance with the peaceful Kwai. But can the Legion help the Kwai defeat their oppressors and still make their way back home to Earth?