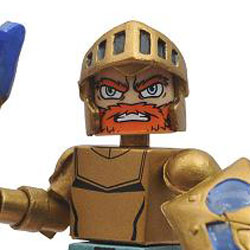 When the San Diego Comic Con rolls around in July, expect Art Asylum to be there once again with some con exclusives that will have fans lining up. – Marvel vs. Capcom Minimates Box Set – From the arenas of “Marvel vs. Capcom 3″ come four of the game’s greatest heroes, as an exclusive four-pack of Minimates! Clad in their “Player 2″ colors, Dante, Phoenix, Arthur and Deadpool each stand 2.5 inches tall with 14 points of articulation, sculpted by Diamond Select Toys and Art Asylum. – Alice: Madness Returns Minimate – The first toy from the long-awaited sequel to “American McGee’s Alice” makes its debut at SDCC! This 2.5-inch, highly poseable mini-figure is based on Alice’s look from “Alice: Madness Returns,” and is the only Alice Minimate that will be produced! Sculpted by Diamond Select Toys and Art Asylum. – Femme Fatales Alice PVC Statue – This new, darker repaint of the Femme Fatales 9-inch Alice statue offers another interpretation of how young Alice might have looked a decade or so after that first tumble down the rabbit hole. Sculpted by Sam Greenwell and limited to 100 pieces.

It appears that this is only the tip of the iceberg of exclusive toys, Art Asylum and Diamond Select Toys will have at the show.  According to Art Asylum there will be four individually bagged Minimates X figures that will be given away during the show.