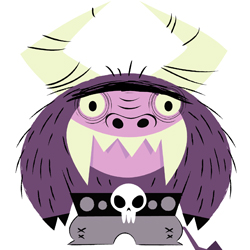 From the Vault: Foster’s Home For Imaginary Friends Season 1 DVD

In a world in which imaginary friends are REAL!
“This is my imaginary friend, Blooregard Q. Kazoo.”
One boy will break all the rules to save his friend
“You’re too old to keep him, Mac. Bloo needs to go!”
With the help of some unusual friends,
“I’m sorry, is that OK?”
and some sage advice,
“COCOCO CO CO COCOCOCO COCO”
Mac will discover, there’s nothing imaginary about true friendship.

Seriously, why isn’t this a movie yet? I got a chance to watch the Foster’s Home For Imaginary Friends Season 1 DVD set and the show is just like I remember. Kicking off with a three-part action saga, the show eventually settles into zany sitcom territory. The first arc establishes a world much like our own, except that imaginary friends are real, tangible creatures created by children. Even just describing this seems odd as the show never dwells on it. Which makes sense since we don’t go around describing our own world by pointing out that motorcycles can’t talk.

Mac, Bloo and Eduardo Too

In this DVD set we’re introduced to Bloo, Mac, Eduardo, Coco, Frankie, Wilt, Mr. Herriman and Madam Foster, who are a blue cylinder, and 8-year-old kid, a hairy purple monster, an airplane/duck/palm tree, a college student, a basketball ragdoll, a man-sized bunny and an 80 year old lady, respectively. Probably the weirdest cast this side of Bill and Ted’s Bogus Journey. The show then goes on to explore the relationships between the characters as sitcom plots spiral out of control. Strangely enough, the relationship given the most time in the first season is not that of Mac and Bloo, but rather the two people who take care of the day-to-day operation of Foster’s, Frankie and Mr. Herriman. They get a lot of character development, which is surprising since they’re not the leads… and this is a cartoon.
Foster’s is packed with humor. It has plenty of slapstick antics for the kiddies and more complex gags for the adults. The show is endearing, hilarious and infinitely quotable, not to mention that it has one of the most memorable instrumental pieces in recent memory. At times some of the repeating gags seem to take forever, and their zany montages go a little long, but if you’re familiar with Craig McCracken’s work you know that he doesn’t necessarily follow standard cartoon pacing.

The DVD is solid, packing featurettes, TV spots and character bios, as well as the original end-of-episode gags, which, for some reason, are not attached to the shows. The inner slip that has the episode list is a little strange, since it weirdly refers to Bloo by his full name in every episode, giving me the sense that it was written by someone who just skimmed the shows.

By this time, I’m sure it’s obvious that this compilation rates highly for me, everything about it is entertaining as we see the character’s at Foster’s start to gain their voice and personalities. Foster’s Home for Imaginary Friends Season 1 DVD set get 4.5 out of 5 stars. If you have an opportunity to get it I strongly recommend that you pick it up.