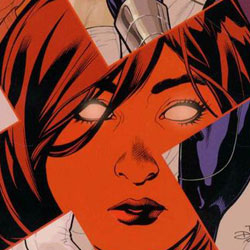 The X-Men are doing something. Hope is bringing mutants to life, or out of their shell, or something that is making them mutanty. But it’s different now, and no one’s really certain why. I imagine that a lot of reviews start off with a “Previously on …” but, I’m sorry, I’ve no idea. That’s half the point, actually. I decided to just jump in, as they say, and see what the Uncanny X-Men were up to these days.

Sadly, I’m not 100% certain, having finished reading five issues. That they come directly after X-Men Second Coming is probably not helping, but to anyone who thought that Uncanny X-Men #526 or Uncanny X-Men: The Heroic Age were jumping on points, they’d be wrong.

EVERYTHING IN THE PAST MATTERS

I really wanted to love this book, and starting out with the Uncanny X-Men: The Heroic Age one shot was a good way to get me there. There was a little bit of backstory filling in, and the art was simply beautiful. But then when the Uncanny issues started rolling, it all started to fall apart.

The X-Men are doing something. Hope is bringing mutants to life, or out of their shell, or something that is making them mutanty. But it’s different now, and no one’s really certain why (I think. Maybe I’m just not certain). Each issue of the Uncanny issues is focused around Hope meeting one of the Five Lights (I think that’s what they called them); one of the five new mutants that were picked up following Hope’s arrival back to Earth (or was it her birth; they weren’t clear on that). Each is filled with near-death experiences for the new-mutant, but Hope eventually saves them all.

There’s also something to do with Emma Frost and Sebastian Shaw, but once again, I’ve no idea what happened there, why he was in custody, how no one else knew, and why they stole him away.

ISSUES: MINE OR THE ARTS?

When I started out reading this TPB, I was really excited. Have you seen Jamie McKelvie’s art recently? Or, like … at all!? It’s stupendously beautiful, and he draws Hope like the young girl she’s supposed to be.

Whilce Portacio, on the other hand, obviously has some issues with drawing women that lead him to drawing them all looking like a cross between some sexed out supermodel and an elf from Lord of the Rings. They’re wacked-out proportionally, sharp lines and huge bosoms. It’s a glaring and blatant attempt at playing to the crowd, when in fact he should be ignoring the vocal minority that he thought was the crowd, and listen to the quiet pleading of the rest of us who actually do want to read comics with characters that look like real, feasible, human beings.

This is not a jumping on point. Maybe, if you’ve read Second Coming, this could make more sense to you, but even then, the art is most likely going to jar you right out of the story, your seat, and in some instances, your skin. The characters would be so much more appealing if they simply looked like humans, as it is, Tony Stark looks monstrous, and Hope looks like a predator who’s out to eat my skin before she takes my virginity.