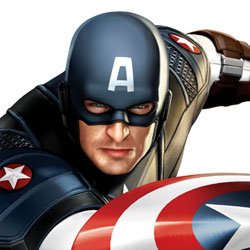 OPINION: Captain America for the World

On Monday morning’s The Morning Stream with Scott Johnson, someone in the chat room asked Stephen Schleicher whether Captain America is as popular in other countries as he is in America, and whether that would be detrimental to the upcoming movie.

Given a) my love for Captain America and b) my love of Australia, where I was born and have lived my whole life, I figured I would take it upon myself to offer up some answers of my own. Sitting on my bookshelves are two of the currently three available Captain America omnibus editions featuring the work of Ed Brubaker, arguably one of the better storylines Captain America has seen over his 70 year career, and in my opinion, probably part of the reason there was such a push for the Captain America: the First Avenger movie.

And it seems to me, after having read so much, that Captain America is much less about the “America” than he is about being “the First Avenger.”

Take a look at just two of the storylines that have featured Captain America over the past decade;

Now, fair point, Rogers is now back working as a lackey for the government, but I do think my point stands: Steve Rogers – we’re not going to quibble about who the real Captain America is, are we? – is an Avenger, first and foremost, and American pinup boy second (or fourth?).

Even back in his original days, Cap was less about being an American and more about the being one of the Allies; fighting Nazis and the Red Skull were his priority, all the posters and pinups for America came second to that.

And that’s my point.

When I read Captain America, I’m reading about Steve Rogers, first Avenger, hero of the Marvel Universe, and the guy that pretty much everybody who is a hero looks up to. You’ve only got to look at the way that Clint Barton idolizes the man to get an idea of what the character is really about.

Unlike Superman, Cap has never been about apple pies and the real American way (or however that one goes); he’s the hero of the Marvel Universe rather than the hero of our modern day America, and that’s, more or less, how he’s always been portrayed, especially with Ed Brubaker writing him. So am I excited for the movie?

Putting aside the awesomeness of the trailers we’ve been seeing, and the fact that Hugo Weaving pretty much ensures success at every turn, being able to see Captain “Steve Rogers” America up on the big screen, punching Nazis and fighting the Red Skull is exactly what comic book movies should be about. I’m not going because I’m a diehard fan of the good ol’ US of A, but rather because Steve Rogers and Captain America, together, represent what comic fans want in a story; a hero, going beyond their limits, for what is right.