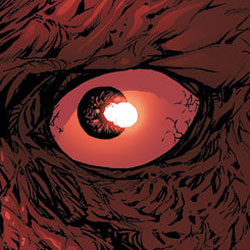 The man in the Bat-suit isn’t Bruce. The man running around killing people appears to be Two-Face. The femme fatale? Uh-oh, things just got interesting. Previously in Batman: When Bruce Wayne “died”, Dick Grayson assumed the mantle of the Bat. When Bruce Wayne returned, Dick Grayson was told he could remain Batman as part of the Batman, Inc. initiative. When Harvey Dent got his face fixed (again), it looked like he was on track to become a good guy, until Batman returned, and Harvey flipped out, cutting and tearing at his face until he returned to the Two-Face persona. During Black Mask’s reign of terror, Two-Face slipped out of Gotham, that is until he found out he was missing his Precious…

We saw Two-Face do the giant coin gimmick during the Silver Age, and we all got a chuckle. We saw Two-Face become the tragic character, always fated to return to his dark side in the hands of Frank Miller. And now, we get to see Two-Face totally crazy as he frantically looks for his missing scarred coin. From the very first page of this issue, it is clear that Harvey Dent isn’t in control as he murders his way through the Gotham underworld, looking for answers. While Two-Face has always been somewhat ghastly looking, in Daniel’s hands Dent is completely frightening as someone who doesn’t care at all for human life.

Doing real detective work has never been Dick Grayson’s strong point, and in this issue, Batman comes off as a bit behind the curve as he tries to piece together where Two-Face will strike next. It doesn’t help that Daniel spends part of the issue trying to tie up the Catgirl storyline by confronting Kitrina Falcone and encouraging her to get out of Gotham before the feud between Mario Falcone and Harvey Dents spills out into the streets. Batman’s appearance in this issue is really the weakest point of the story, and the character seems wedged in for no other reason than his name is on the cover. This book would have been just as good if we had just seen Two-Face murdering his way to Mario Falcone – who we learn does have Harvey’s coin.

While the murder spree leading to Falcone is intense, the real surprise comes at the end of the issue, when Harvey’s ex-wife shows up and seems to put an end to the madness. It’s a huge surprise – or I should say, it is a huge surprise for this reviewer, who hasn’t read an issue of Batman in the last six or seven months. I like this twist, and I’m going to bet the surprises are going to keep coming for a few more issues. Since we don’t really see Gilda’s face, I’m going to bet the girl under the hat isn’t the girl we’re told it is.

When it comes to the art, this is a very dark issue. Not only in terms of the tale being told, but in the dark hues and heavy inks the art team brings to the issue. Because everything is on the dark side, some of the more shocking moments of violence are toned down simply because the dark red blood blends in with the heavy shadows and dark surrounding environment.

As far as Steve Scott’s line work goes, I like how he poses his characters, and he brings a feeling of realism to the characters. While it isn’t my preferred look for comic book characters, it works really well in this issue as a more adult and intense story is taking place. I do wish we could see more faces, but again, the heavy inking/shadowing going on, obscures a great deal of the facial work in this issue.

If you are looking to get a Batman or Two-Face fix, then Batman #710 is worth a look. The story is very intense, as a man who has lost it all deals with the world like he has nothing to lose. I don’t like that Dick comes off as a bit slow on the uptake, and think the Kitrina Falcone sequence could have been ejected completely to make the story even tighter. Overall, I like the big reveal, the art is solid and Daniel has made Two-Face scary. Let’s just hope it isn’t all undone in less than four months. Batman #710 is solid enough to earn 3 out of 5 Stars.