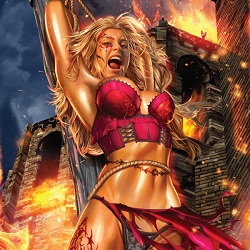 With evil within their midst, gunslinger Braden Cole and witch Anna Williams seek out evil, to crush it before it overruns the land. But does this introductory volume deserve a reprieve? Or should it be burned at the stake? Previously, in Salem’s Daughter: Nothing, this is the first volume of the series.

Gifted and cursed with untold supernatural power, Anna Williams must flee her home of Salem with the wronged gunslinger Braden Cole. Both of their lives are intertwined due to the ramifications of Darius, a demonic force of nature that has goals for Anna aka Salem’s Daughter. Follow the characters through their meeting with Darius, to their confrontation with the famed Jersey Devil, and a pregnant Succubus.

Only when I finished the complete trade paperback,  was I able to boil down what this comic was. If you take “Supernatural” mix it with “Medium”, and toss it into the world of “Bonanza” you have Salem’s Daughter.

There are three stories within, and all three are distinct. First up is the three issue starter arc, where we meet our heroes as they eventually meet and team-up. Second is the Jersey Devil two issue arc that delves deeper in Anna’s powers, and fleshes them out a bit more. The third is a one-shot story about a succubus that is about to give birth. Out of the three, I’d say all had their good points, but each one took place at the same time.

The characters of Anna and Cole are pretty solid, and over the course of the stories they do develop, but Cole is a little behind the curve when compared to Anna. The arch villain that is Darius is bordering on the ridiculous, but after the first story he only shows up in a flashback, and I am kind of thankful for that. Darius is too mysterious when it comes to his intentions towards Anna, does he want her as a bride? Does he want her power? It‘s not clear.

There are moments in the collection that made no sense. For example, Cole states, “I wasn’t sure what to believe in anymore, but I knew I needed to listen to the girl. And I knew my life would never be normal again.” This is after Darius has murdered his wife and child. After Cole has shot Darius multiple times, with a both revolver, and with a single shotgun blast to the face, blowing his head clean off. Normal? Normal flew out the window a long time ago.

Throughout this collection the art chores bounced from artist to artist. Overall, those providing art on this comic did a good job, well knowledge of anatomy, use of light sources, and the rest of what consists of competent story telling.

But that’s not to say there weren’t some hiccups. Where there was supposed to be neck, and mane of a horse, there is a smooth line, but that could be overlooked, as could the fact that that 30 miles outside of Salem, Massachusetts it looks more like Yuma, Arizona.

The character designs for both Anna, and Cole were pretty good, standard and nothing mind blowingly original, but good. I did not care for the design of Darius for some reason, he wasn’t scary or creepy, but was just annoying to look at. I can’t really explain it, it was just a reaction that I had to the character. Both the Jersey Devil, and the Succubus were passable. They looked shlocky, but I have seen worse.

The cover for the TPB is just awful. There is no one getting burned at the stake in a Victoria’s Secret thong in this TPB. There is a attempted hanging, but I guess it would be extremely hard to make that look sexy. The “painting” by Greg Horn is a recycled image from one of the third issues multiple covers. If they were going to recycle a cover, they should have used the other cover for issue three by Nat Jones, a far superior cover to that of Horn.

THE VERDICT: RIDING OFF INTO THE SUNSET

This TPB taught me a lesson. Just because something looks bad on the outside, doesn’t mean it’s bad on the inside. I was expecting a trashy tale, that had no legs what to speak of to stand upon, and would slap the ground harder than a heifer with mad cow disease. But happily, I was wrong.

The stories featured are pretty good, and with a pretty sound concept, the title has a good amount of room in order to explore it’s world. The artists on the title did a commendable job, that was visually appealing, and presented characters while not the most inventive, they were still as solid as granite.

If you can get past the cover image, and the concept of a series that is as if you mixed “Supernatural” with “Medium”, and sat it upon “Bonanza”. I am pretty sure you will like this. In closing, the Salem’s Daughter TPB receives 4 Stars, out of 5.