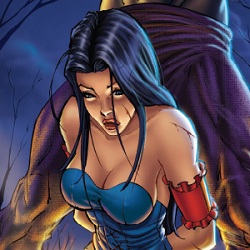 Surrounded and clearly outnumbered, Sela and her friends have not only the mad mob of villagers to contend with, but also Orcus and his army outside the city gates. Can the spirit of the Earth save them? Or are they doomed? Previously, in Grimm Fairy Tales: As Sela, Blake, and Bolder have journeyed to the walled city ruled by the weak King William who still lives in the shadow of his father, Orcus’ army amasses outside the city walls, waiting to strike.

ENEMY AT THE GATES

Haunted by his youthful debauchery, and the scornful words of his now deceased father, King William has to make a decision that will either lead to the salvation of his beloved city, or it’s downfall. While Sela, Blake, and Bolder get a new ally in the form of Duranna, who just may be Gaia, the spirit of the Earth, can these sides team-up to save the city from the monstrous hordes, or will their lack of cooperation be their downfall?

Yet another blind read, it took me a few pages to find my footing but once that happened all was well, until it wasn’t. By my count, Sela’s friends Blake, and Bolder are only mentioned by name once throughout the entire issue, so I just mentally noted them as Knight, and Dwarf. The story was more about building to something more.

The characters interaction felt forced to me, that they were plucked from three separate worlds, and forcibly fit into this patchwork of a story like a child would fit the wrong jigsaw piece in just to get the thing done. Separate they seemed to work much better, but even then their dialogue and characterization was clunky, and had that me wanting to just jump to the next page, and then the page after that, and so forth. But I soldiered on, I finished the issue.

BAD BREW FOR YOU

The artwork right off the bat is all wrong. The anatomy is extremely weak, and cries out the heyday of the “Bad Girl” ’90s. Breasts are stiff, and have no life to them, as if the silicone had solidified. I know what you might say, “It’s a still picture, it would have no life to it.” But you’d be wrong.

If a woman is standing up with no bra, her breasts will not just stick straight out. They are really attached slightly to the side of chest rather than directly in the front. Odd muscular attributes also pop up, and distract the eye. They make me think that the artist was just trying to throw a line of two in there for good measure, where it wasn’t necessary, and ended up hurting a already weakened design.

The character designs are awfully lacking, as I found that it was hard to distinguish between men and women. The colors hit me pretty hard on the first page, as I began to read this comic. They look less like watercolors, and more like a box of Crayola’s, and that was quite disappointing. The shadows that are attempted fall flat on their face, and just provide a odd juxtaposition to the world around the characters. The colorist probably should have toned things down, and went with a flatter approach, that may have salvaged the art somewhat, but that bell has already been rung. No taking it back.

As far as the covers are concerned, there are three, and out of them the second cover by Steven Cummings is by far the best. It sets the tone for the story perfectly no matter how lacking the story and art are, the cover does it’s job and sells it perfectly.

The story was lacking, and bounced all over the place. The characters were weak both textually, and visually, even more so with the latter. The colors failed the comic, and without even the simplest task of clearly distinguish the sexes, the comic fell flat for me.

If you are into scenes that involve somewhat pretty girls becoming pregnant instantaneously, and having their clothes ripped off by goblins and placed in shackles as Tim Curry from “Legend” stands over them be my guest and pick this comic up. But if you want a more than that, then keep on walking bub. In closing, Grimm Fairy Tales #59 receives 2 Stars, out of 5.