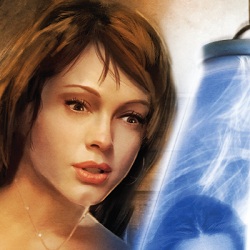 With Piper trapped in a nether realm, and the Elders under siege, can Phoebe, Paige, and Leo uncover a ancient secret that concerns all witches, and avert a catastrophe? Previously, in Charmed: Phoebe, Piper, and Paige are the Charmed Ones, sisters who are good witches that fight literary on the side of the Angels, since Piper’s husband Leo is one. Currently the sisters are torn asunder with Piper trapped within a nether realm, and Neena, the First Witch waging a war on Heaven.

THE POWER OF THREE, MINUS ONE

With Piper unable to render any assistance, and the demonic hordes of Neena, the first witch marching on heaven, Leo, Piper’s husband, has to reveal the secret origins of their magical powers in order for the sisters to know what they are up against. Will the lessons Piper has been given help her return home? Or will the unexpected guest be a game changer?

I have to say, I haven’t watched a episode of Charmed in years the characters of the comic seemed very honest to the characters I once knew, which is a must when you are dealing with established characters. With that being said I was kind of lost when it comes to the story.

I had no clue what came before, I blindly jumped into this issue, and as a result I was scratching my head half way through it. Without prior knowledge it took me about ten pages or so to get caught up in enough narrative for me to figure out what exactly was going on. It could have been worse, but there is nothing that catches you up on the story, no “Previously, in…” and so forth, which would be more reader friendly, and inviting.

As I said the Charmed Ones, and their supporting cast of characters all matched up from what I knew from before, they all rang true, the dialogue was believable, and for a adaptation of a TV show, I will say it was a very good take on the characters. But while the characterization is very nice, the story is what hindered the character development for me.

The artwork within doesn’t really capture to the likenesses of the actors that portrayed the characters. Yes, it’s close enough for you to fill in the blanks, and maybe they couldn’t fully bring their likenesses to the page due to rights issues, in the end the inability to depict them hurts the story. But the colored over pencils look within, that started to my knowledge in the Marvel Comics mini-series “Origin”, doesn’t do the art here any favors.

It all looks rushed, and the line work doesn’t have any impact, and comes off as quite weak. The page layouts are too loose, and while what is depicted should be dramatic, like a demonic army marching on heaven. This thing what would be epic, falls flat, and comes off more as a movie put out by the Asylum. The people who bring those Syfy Saturday movies such as Transmorphers: Fall of Man, and Mega Shark vs. Giant Octopus.

As for the covers, with one being a photo cover, I don’t really count that, since this isn’t a magazine, it’s a comic book. The second by David Seidman is pretty nice, and captures the issues mood, while still giving you something to ogle at.

THE VERDICT: SET ME FREE, FROM THE POWER OF THREE

While the characters are strong, and come off exactly as they were portrayed in the show, that is the only thing that the issue really gets right. The artwork doesn’t quite cut it, the choice of coloring over the weak pencils hurts the ability to convey the story, and the artists less than spectacular page layouts leave much to be desired.

I realize that I this comic probably isn’t for the casual reader, and is more suited to the diehard Charmed fans that are out there, who clamored for a continuation of the story that the series started. Frankly, I am not one of them. This comic isn’t catered to the average reader, and just didn’t click with me.

If you loved Charmed, and wanted to see new stories, then I say check this series out from Zenescope. If you wanted to blindly try a new comic book, then I don’t really think this is the right comic to take for a test drive. In closing, Charmed #9, receives 2.5 Stars, out of 5.