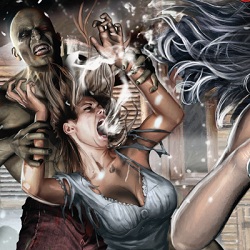 With the mutterings of a Native American curse, chaos breaks out. With the Civil War in full tilt, only the lowest of the low can quell the situation and bring the mining town Brimstone, to order. But does this Horror/Spaghetti Western have what it takes to ride high in the saddle? Or is it a green horn that’s been turned into lunchmeat? Previously, in Brimstone: Nothing, this is the first issue.

At the Brimstone Mining Outpost in the newly formed state of Nevada, a disagreement results with a curse being place on the mine and those around it. Evil forces tear apart those that seek to exploit the land, and the call goes out for a few bad men to stop the evil, and bring the mine back up and running. Bad men from all over heed the call to stop this evil, all for the right price.

This issue reads like a Grindhouse movie from the mid to late 70’s – which isn’t a bad thing. The characters are all there. You have the Company Representative; Cracker, a assassin; Black Jackson, book smart slave who’s a powerhouse; McFarley, expert lock-pick specialist, and so-so thief; Chen Zhu, the explosives expert; and Victor, master gunslinger, who doesn’t mind killing kids.

All the characters and the story add up to a rollicking good time. But this issue is really only feels like half of what it should be. It ends okay, but left me wanting more. The story wasn’t nothing shockingly original but the setting, and the time frame is what made it stand out. Miners, the Civil War, Gunslingers, Irishmen, TNT totting rail workers, all good stuff, and leaves a lot of room to play with, and hopefully build upon.

The characters themselves are quite interesting, and since this issue really serves to introduce them, it takes up a bulk of the page count, and the story focus, which is what I believe they were going for. They characters don’t like each other. They are not the bestest of friends, some have grudges against each other, but that is common for this type of story where the worst of the worst have to set aside their differences to come out on top, and heavier in the wallet.

AN IRISHMAN, A CHINAMAN, AND A GUNSLINGER WALK INTO A BAR…

The artwork by Hyunsang Michael Cho was simply amazing. I have never heard of this guy before, but now that he has popped up on my radar he will stay there. I will describe his style as a gritty water color painted look. It reminded me of Eddie Campbell, the artist who worked with Alan Moore on “From Hell”, and that to me, is really refreshing.

The characters are distinct. The Irishman, McFarley, looks like a scumbag that would stab you in the ribs with a stiletto, and leave you bleeding a in a alley for the money in your pocket. The environment Cho depicts is wonderful, and inviting. It blends well with the characters that inhabit it, but for having such little contrast of dark colors, it’s surprisingly detailed, and feels very honest.

The covers by Greg Horn and Ben Templesmith are not really necessary. While Templesmith’s cover comes the closest to approximating the interior artwork, they don’t really offer up anything that gives the comic consumer a inkling what to expect. Just to burst your “bubble”, there are no gun totting, bodice wearing, woman in this issue. But, who’s to say you can’t hold out hope for issue two. I wish they’d let Cho do a cover since his art is very strong, and would have looked better.

THE VERDICT: CONFLICT IS HEALTHY

Even though the entertaining story that does feel a bit hindered by length, the characters we are introduced to, more than make up for it. The artwork that graces these pages is something I didn’t expect, but I am all for happy surprises any time they come around.

For those that like tales of horror, westerns, and your “banded together under one cause, money”-type stories, this comic is for you. Brimstone #1 receives 4 Stars, out of 5.