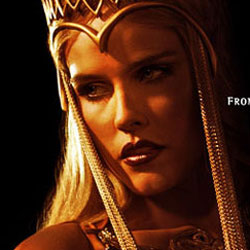 CONTEST: You can become a god in The Immortals Do you have what it takes to be a Greek God or Goddess?  If so, then Relativity Media – the studio behind the visually spectacular 3D action adventure Immortals – wants you to sign up right away!  Exclusively offered via Facebook today, the Relativity-Archaia Immortals promotion sponsored by Fandango, the nation’s leading moviegoer destination, will crown the winners on July 1 with a king’s ransom-worth of prizes, including a grand prize where contest winners will be immortalized as graphic novel characters with the “reveal” taking place at the Archaia panel during Comic-Con in a special photo-op ceremony.   Winners will also receive an all-expenses-paid trip to San Diego to attend the 2011 Comic-Con International. The package includes airfare, hotel accommodations, and exclusive access to special Immortals events throughout the convention.

Entrants will share their reasons why they are the perfect candidate to become the Greek God (Apollo) or Goddess (Artemis) via the Facebook application form.  The top-10 entries (five women and five men) with the most “Likes” at the end of the contest period will be asked to submit “authentic” audition tapes for the roles to Relativity Media.  The film’s celebrated Director Tarsem Singh will select his two favorites (one man, one woman) and they will be crowned the winners.

Archaia will release the Immortals: Gods and Heroes graphic novel in September, serving as a prelude to the 3D motion picture, which releases worldwide on November 11, 2011. The graphic novel will expand upon the film’s key characters and events through a series of original tales written and illustrated by some of the top names in comics, including David Mack (Kabuki), Ron Marz (Witchblade), Dennis Calero (Dark Tower) and Ben Templesmith (30 Days of Night). The graphic novel will be published through Archaia’s Black Label division, a publishing pipeline dedicated to working alongside creative professionals within the entertainment industry eager to launch and expand their brands in the publishing world.

The 3D epic is produced by Gianni Nunnari (300), Mark Canton (300), and Relativity’s CEO Ryan Kavanaugh (The Fighter), and will be distributed by Relativity Media worldwide.  In the UK, Australia, and certain other territories, distribution is in association with Universal Pictures International. In Immortals, the ruthless King Hyperion (Rourke) leads his bloodthirsty army on a murderous rampage across Greece to find a deadly weapon that will destroy humanity. A mortal chosen by Zeus named Theseus (Cavill) must lead the fight against Hyperion and his evil army with the fate of mankind and the Gods at stake.

About Relativity Media, LLC
Relativity Media is a next-generation studio engaged in multiple aspects of entertainment including full-scale film and television production and distribution, the co-financing of major studio film slates, music publishing, sports management, and digital media.  Additionally, the company makes strategic partnerships with, and investments in, media and entertainment-related companies and assets.

To date, Relativity has committed to, produced and/or financed more than 200 motion pictures.  Released films have accumulated more than $15 billion in worldwide box office receipts.  Relativity’s recent films include: Hop, Limitless, Battle: Los Angeles, Season of The Witch, Little Fockers, The Fighter, The Social Network, Salt, Despicable Me, Grown Ups, Dear John, It’s Complicated, Couples Retreat, and Zombieland. Upcoming films for Relativity include: Shark Night 3D, Immortals, Anonymous, Bridesmaids, and Cowboys & Aliens.  Thirty-six of the company’s films have opened to No. 1 at the box office.  Relativity films have earned 60 Oscar® nominations, including nods for The Fighter, The Social Network, The Wolfman, Nine, A Serious Man, Frost/Nixon, Atonement, American Gangster and 3:10 to Yuma. Fifty-five of Relativity’s films have each generated more than $100 million in worldwide box-office receipts.

Relativity also owns and operates Rogue Pictures, a company that specializes in films targeted to the 13-25 year old audience, and RogueLife, Relativity’s digital studio which is developing original content for the Web, and creating sustainable online platforms and communities. RelativityREAL, Relativity’s television arm, is currently producing 14 series and more than 20 pilots including Police Women for TLC, Coming Home for Lifetime,  and The Great Food Truck Race for Food Network.

About Archaia Entertainment
Archaia Entertainment, LLC is a multi-award-winning graphic novel publisher with more than 50 renowned publishing brands, including such domestic and international hits as Mouse Guard, Return of the Dapper Men, Gunnerkrigg Court, Awakening, The Killer, Days Missing, Tumor, Syndrome, Artesia, Engineer, and an entire line of The Jim Henson Company graphic novels.  Archaia has built an unparalleled reputation for producing meaningful content that perpetually transforms minds, building one of the industry’s most visually stunning and eclectic slates of graphic novels.  Archaia was named Graphic Novel Publisher of the Year according to Ain’t it Cool News, Graphic Policy, and Comic Related, and was honored with nine 2011 Eisner Awards nominations. Archaia has also successfully emerged as a prolific storyteller in all facets of the entertainment industry, extending their popular brands into film, television, gaming, and branded digital media.