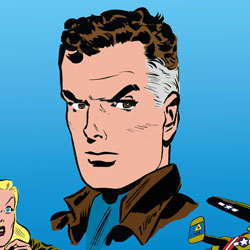 Johnny Hazard, the legendary aviation strip by Frank Robbins, returns to his wartime exploits with Hermes Press’s Johnny Hazard, Volume One-The Newspaper Dailies: 1944-1946. After a successful stint drawing Scorchy Smith, cartoonist Frank Robbins struck out on December 5, 1944 with the adventures of Hazard. Ironically, Hazard’s debut story, where he escapes from a Nazi P.O.W. camp, began the day before the Allies invaded France on D-Day. From there on, in the waning days of World War II to the burgeoning ones of the Cold War, Johnny fought enemy agents, dealt with Veronica Lake-esque femme fatales, and embarked on endless adventures.

Robbin’s inimitable line and crisp design is at play through Hazard’s run, and Hermes represents this dynamic comic strip in its own series of hardcover library editions. Reproduced in its entirety from the King Features printing proofs, Johnny Hazard, Volume One-The Newspaper Dailies: 1944-1946 is the start of your beautiful friendship with this two-fisted aviator.