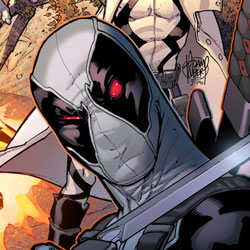 UNCANNY X-FORCE #12 (MAY110691)
UNCANNY X-FORCE #12 KUBERT VARIANT (MAY110692)
UNCANNY X-FORCE #12 I AM CAPTAIN AMERICA VARIANT (MAY110693)
Written by RICK REMENDER
Penciled by MARK BROOKS
Cover by ESAD RIBIC
Variant Cover by ADAM KUBERT
I AM CAPTAIN AMERICA Variant by CHRIS STEVENS
The red-hot creative team of Rick Remender and Mark Brooks send Wolverine’s black ops band of deadly mutants to take on the whole Age of Apocalypse! If they fail, Warren Worthington will be no more and the Dark Angel inside him will raze the Earth! Get in on the action packed return to the Age of Apocalypse, with a variant cover from one of the artists who started it all in Uncanny X-Force #12 Kubert Variant!