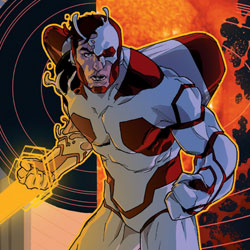 Stan Lee’s superhero juggernaut soldiers on with Dan Abnett, and Andy Lanning on the front lines! Find out if Stewart will continue saving the streets as Soldier Zero or if someone close to him will take up the mantle. The second arc of the bestselling series comes to a close and will have you yelling “Excelsior!”

Finally in London, Clint and Selena find themselves driven apart by a secret from Selena’s past. And as the so-called “peace” created by the military slips away, one question will rise from the ashes: are the Clint and Selena more powerful together…or apart? If you loved the 28 DAYS LATER movies, this is the comic book you should be reading!

The epic can’t-miss conclusion of “F.O.W.L. Disposition!” Will the diabolical Duckthulu rise from the depths or will Darkwing Duck devise a way to detour the dreadful destruction? All this and more alliteration as the celebrated team Ian Brill and James Silvani hilariously put the “dark” in Darkwing Duck!

What doesn’t kill you, makes you stronger! The hospital sent cancer patient Alan Gates home to die. Instead, his tumor transformed him into something more than human…When Alan discovers that his tumor is actually a mysterious parasite — he’s granted a second lease on life… and incredible, otherworldly powers! In this issue, learn what is the secret truth behind the parasitic alien living beneath Alan’s skin! It’s dark. It’s twisted. And MALIGNANT MAN is unlike anything else on the stands. This is a sci-fi thriller that can’t be missed!

The celebration of 70 years of Walt Disney’s Comics continues here with a salute to modern Mickey master Noel Van Horn, featuring two stories never-before-seen in the United States! “Metamorphosis” finds Mickey confronting an out-of-control mechanical monster unlike anything you’ve ever seen, while “Rocky Road to Ruin” chronicles Mickey and Horace’s struggle to succeed in the cutthroat world of…ice cream sales? Also features the classic Floyd Gottfredson story “Mess Production,” not seen in the United States since 1934!