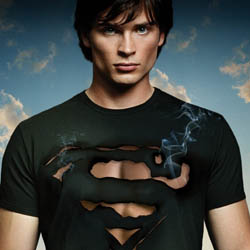 Or – “In Honor Of The Series Finale…”

It’s been a long, strange trip for the denizens of Smallville, Kansas, and it looks like there might be a red cape in their near future…  Before the finale, Major Spoilers says farewell to Tom Welling, the Junior Lifeguard Association and all those beautiful young women with this week’s Top Ten!

(Due to a conflict in Stephen’s schedule, this Top Ten is being written by Matthew who, in the interests of full disclosure, must admit to never having actually watched an entire episode of Smallville.  Caveat emptor.)

#10 – The One With The Flying And The Tornado We start with one of the defining moments of the early seasons of the show, probably, as a giant storm coalesces on Smallville, and Clark is forced to rush into action to save Lana.  With a little help from the literally impossible weather conditions during the storm, Clark Kent flies for the first time.  While by all accounts this is a pivotal and awe-inspiring moment in the life of young Clark Kent, as a Kansas resident I can show you footage of a Volkswagen Beetle doing an equal amount of “flying” during the ’66 Topeka tornado.

#9 – The One With The Legion Or The JSA Or Something Though it’s clear from early seasons that Clark is the first character to gain super-powers, and the other residents all get their abilities from exposure to Kryptonite or Kryptonite radiation, later seasons have brought to light other unrelated superhumans.  Arthur Curry, Victor Stone, Bart Allen and others have popped up, and somewhere along the line viewers learn that there was an honest to Pete superhero team sneaking around.  Of course, they’re either from the past or the future (I kinda skimmed the Wiki), but young Master Kent is probably less isolated knowing he’s not the only one with a secret, I’m guessing.

#8 – The One Where Lana Became A Kung-Fu Master I only caught a few moments of this one on cable, but apparently, when she left Kansas, Lana Lang followed what may have been her roots (although she may be Native American, possibly) and ended up in a mysterious city in an undifferentiated kind of Eastern city-state.  I suspect this one may have been what they call a ‘backdoor pilot,’ like that episode of the Brady Bunch with Ken Berry and his adoptive kids.  She fought against evil using super-high kicks, and from snippets I saw a few weeks later, apparently grows up to be Ming-Na Wen.  Maybe she’ll come back on the finale and use lightning kicks to finally help Clark overcome the power of whomever it is that threatens the wheatlands.  (I’m betting Composite Superman or something…)

#7 – The One With The Red Kryptonite The first time Clark encounters red kryptonite in any medium, it’s always shocking, until they discover that something makes it wear off in precisely 24 hours.  I’ve always kind of wondered why the effective life of that radation would exactly mirror one rotation of this planet, being as how the mineral itself hails from Krypton (which was a larger sphere with a longer year, according to the Silver Age of Comics.)  Is the specific wavelength of the kryptonite radiation perfectly attuned to whatever planet it ends up on?  Or maybe it has a particularly violent reaction with Earth’s atmosphere that gives it a ridiculously short half-life?  Either way, ‘Silver Streak’ is vastly underrated among 70’s comedies.

#6 – The One Where Pa Kent Got Amnesia Then there was the time that Jonathan Kent took a particularly hard blow to the head, and was kidnapped by a small-town sheriff and his corrupt county selectman, then framed for illegally transporting moonshine into Chickesaw County.  Thankfully, Clark was able to slip past the hidden speed traps and such, and even lifted Pa’s car across the collapsed bridges and strangely out-of-place cliffsides, getting his pater familias home safely, even as a smaller blonde man coyly tried to steal his identity.  A memorable episode indeed, perhaps, and one of the strongest pre-mortem outings for Pa Kent in the series.

#5 – The One Where Green Arrow Has A Plan Of course, nothing is quite as suspenseful as the time when Oliver Queen has to stave off a hostile takeover of Queen Industries by Lex Luthor.  A massive explosion left the board of directors dead and the interim head of Queen Industries, Bernard Lomax, was no exception.  It was only through a brilliant use of Clark’s superpowers and Ollie’s technical prowess (turns out that a boxing glove arrow quickly doubles as a makeshift splint) that they are able to hide the truth about Mr. Lomax long enough for the true culprits to be brought to justice.  It’s the longest Labor Day weekend of Clark Kent’s life, but one that he would always remember, bringing him ever closer to his destiny as Superman…

#4 -The One Where Luthor Went Undercover Another one that I suspect was designed as a backdoor pilot came in Season 3, 5, 7 or possibly 2 when Lex Luthor was cut off by his father, Lionel Twain, and went undercover at Metropolis University.  I think he was trying to get to Lana, but she was busy learning how to fight from Raul Julia, and Lex was forced to masquerade AS Lana to get at her diary or something.  Either way, when the jocks of the university start harassing Luthor, they get more than they bargained for, first getting humiliated at football then later brutally assassinated and made to look like suicides.  Lex isn’t afraid to get his hands dirty and he doesn’t even wash them, because he’s evil.

#3 – The One With The Kryptonite Mask A standout among the early ‘Kryptonite-powered-monster-of-the-week’ episodes came when nebbishy young drama-team member Stanley (who I think was friends with Pete Ross) found his lucky commedia dell’arte mask coated in kryptonite fragments.  He gained the requisite ‘Meteor Freak’ super-powers, but in a twist, used them to overcome his crippling shyness and finally get up the courage to ask Chloe out to the Cocoa Bongo club, Metropolis’ hottest night spot.  By the time Clark managed to free him of the Green K, young Stan had learned a valuable lesson about life, love, and Jack Russell terriers.

#2 -The One Where There’s Something On The Wing Of course, a giant standout among Season 5 episodes comes with the episode “Terror”, as the creators step away from the main cast (I think Annette O’Toole was off making ‘America Beauty’) and give us the haunting tale of Bob Wilson, a young man fresh off a nervous breakdown, who finds his fears given a terrifyingly tangible form.  Never have the words “It’s all in your head” been more macabre and unsettling, and even though they never quite convinced me of the reality of the monster (the pyrokinetic football coach played by ‘Wonder Years Dad’ was better realized) it’s a pretty strong performance by someone I think might be a young Chris Pine… For my money, though, you cannot beat the episodes where Clark and Kara are possessed by their Kryptonian natures, and join Jor-El and the extended El clan on a wacky camping trip in the old Kryptonian tradition.  Former wild-and-crazy guy Steve Martin does a good job as Jor-El, and Laura Vandekampporknbeans is pretty cute throughout.  I do wonder why all the other Kryptonians can fly without the help of a tornado, but it’s clear that the producers don’t want us to think too hard about all of it, just enjoying the ride as we watch what amounts to a super-powered Brady Bunch.

There you have it, folks.  My picks from a stellar decade of not-being-Superman while somehow being a key factor in every historical event of merit in the entire DC Universe.  We didn’t even get to talk about the time when Clark punched out a cow, battled Sharez Jek on Androzani Major, or fell in love with a beautiful young girl named Bella.  Now that Smallville is gone, I shall have to spend my Friday nights doing the same thing I’ve done for the past ten years:  Preparing Hero Histories and reading Snopes.com while my wife complains that I never take out the trash.  We’ll miss you, Clark, but most of all we’ll miss the stunning array of gorgeous women who orbit you like fleas on a feral mongrel dog…