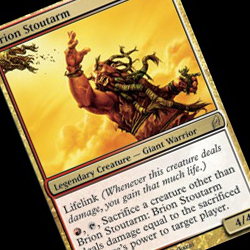 New Phyrexia hits the shelves today, so to celebrate I put together a casual Magic: TheGathering deck that I’d like to share with you.

Remember, you can go to Wizards of the Coast’s site to see all these cards.

As you can probably tell the point of the deck is to get a Grafted Exoskeleton on Brion Stoutarm and then chuck critters at your opponent for some lifelinky poisony damage. Of course the two main combo pieces don’t come from the new set, but there are a lot of fantastic cards in New Phyrexia that make this deck more playable than ever. Phyrexian Mana is huge in this deck, it allows you to get out a Porcelain Legionnaire one turn early, which also helps you to keep chucking mana open later in the game. Of course the MVP of this deck is Mutagenic growth. Allowing you to pump a creature that’s about to get chucked at your opponent for 0 mana. Now I’ll let you look at that for a second…

You can pay two life to give a creature you’re about to throw +2/+2, then you chuck it and Brion’s lifelink kicks in. That’s right, you just dealt 2 extra damage to your opponent for essentially 0 mana and 0 life! Without even having to attack! Good job, I’m so proud of you. In order to ramp up and fix my mana I included Mirrodin Besieged all-star Viridian Emissary, here’s a critter that is pretty much begging to be launched at the enemy, netting you 2 life and a land! Since the deck is extended (otherwise Brion wouldn’t be here) I threw in four Naya Panoramas to make sure we can hit Naya colors more reliably.

The Rest of The Team

Ogre Sentry is a great defensive card, stopping most offensive early game creatures dead and later making great ammo for Brion. Brass Squire will help to get the exoskeleton on your quarterback, especially if someone manages to take him out and you re-cast him. You might think that Planar Cleansing is an odd choice for a deck that relies on artifacts, but that is why Frantic Salvage is there, besides in the current environment having something that wipes out all artifacts is likely to save your life more than once. Galvanic Blast and Apostle’s Blessing are both great spells that can be used defensively to protect your combo pieces until the deck is ready to fire.

There are a lot of places you can go with this deck. Soul’s fire wouldn’t be out of the question, neither would adding more spot removal for artifacts. Naturalize is still a solid choice for decks running green. Rage extractor seems like it would be good, but you’d only want to sideboard it in if your opponent is canceling out your infect powers, otherwise you’d be dealing redundant damage.

Hope you guys enjoyed this deck, if any of you get to play it let me know how it goes.