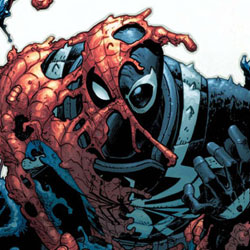 Spider-Island: Can Venom put an end to the madness? Marvel released a teaser image and information regarding Venom’s involvement with Spider-Island.

With a whole of city of Spider-Men & Women to fight through, can Flash maintain control of a suit that wants nothing less than to put an end to any and all wall-crawlers? Or will the kill switch finally be thrown on America’s ultimate man in black? Find out when Venom takes Manhattan this August, only in Venom #6!

Rick Remender is pretty tight on who Venom will be taking on in the event, but they are “huge characters”.

Venom #6 gets in on the Spider-Island action in August.