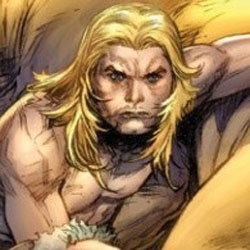 Marvel released a sneak peek of Ka-Zar #1 that arrives in June.

The Savage Land is under attack and only Ka-Zar can save his home from slaughter! The hidden jungle is about to become a warzone as unknown soldiers set off to set the Savage Land ablaze! However, Ka-Zar is not the only defender of this sacred land as a mythical tribe readies their arms to defend their home and drive out these deadly foes. Trapped between the opposing forces, it will be up to Ka-Zar and Shanna to defuse the brewing war before these two fuming enemies turn the Savage Land into scorched earth this June