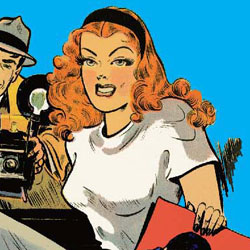 Brenda Starr may have just left the daily comics page-but Hermes Press brings you back to her beginnings with Brenda Starr, Reporter by Dale Messick: The Collected Daily and Sunday Strips, Volume One! This fashionable and hard-hitting red-headed girl journalist first made headlines with her June 30, 1940 debut in newspapers everywhere, teaching post-Depression and pre-War America that a woman can be both sexy and empowered at the same time. Created by Dale Messick, the first female cartoonist to write and draw a syndicated strip, Brenda’s successful mix of adventure, fashion and romance made her one of the longest-running comic strips in newspaper history.

Volume 1 reprints, for the first time ever, Brenda’s first two Sunday storylines in full color, as well as the first daily strip sequence. This is the first of many volumes that chronicle the adventures of this amazing journalist. As an extra bonus, Volume 1 contains the first “Man of Mystery” story starring Basil St. John, Brenda’s love interest.

This is your chance to get acquainted with Brenda all over again, from the beginning on. Just don’t be surprised if you fall in love with her.