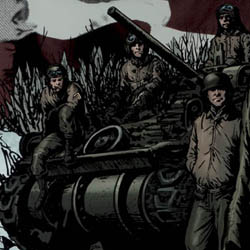 Or – “Two Guys Talking Can Be As Tense As A Fistfight…” One of the highlights of the early arcs of The Boys came when Wee Hughie sat down with the man known only as The Legend (any resemblance to comic figures past or present is probably intentional) for a history lesson about superhumans.  The last couple of issues have given us even more depth and world-building as Greg Mallory explains the events that led up to the formation of The Boys themselves…  It’s been a bloody story, but it ain’t over yet. Previously, on The Boys: The company now known as Vought-American has a long and sordid history of profiteering and graft at the expense of the American serviceman and the public good.  Their superhuman projects with Compound V have led to countless deaths, while their substandard equipment has been killing innocents for over a century.  During World War II, things were particularly complex, combining superhumans and poor engineering into a virtual charnelhouse, and Greg Mallory was there…

I’m pleasantly surprised with this arc, actually, showing as it does a simple conversation between two men while watching the sun go down.  It’s relatively hard in comics parlance to do the talking heads story without falling into the trap of extreme decompression or endless cycling Bendis conversations, but Ennis does a fine job here.  Mallory bridges the gap between World War II and Korea, explaining that Vought’s sub-par armaments created more malcontents than just himself, and that many of them came together to form the nucleus of what would become the CIA.  Parts of the story mirror the establishment of modern intelligence in our world, including the use of real historical figures (like the ‘father of central intelligence’ William Donovan) as part of the story.  Of course, the superheroes popping up aren’t a part of our world, and in those early days, only Greg Mallory was worried about the goofballs in the spandex and the capes and what they could eventually become…

And What About Butcher, Anyway?

Mallory’s story dovetails with The Legends in the early sixties, and we see the real human cost of Vought’s involvement in the Viet Nam conflict, as well as a few horrifying revelations about characters we’ve already seen.  (I don’t want to be TOO specific, but the look on Hughie’s face when he finds out who the mother of The Legend’s child is looks remarkably like my own when reading that page.)  To try and counter the superheroic menace, these men who had become the CIA captured Vogelbaum, the scientist who created the supes for Vought and set him about creating their own army.  The whole conversation is truly compelling, as much for what Mallory DOESN’T say as what he does, and when he reveals why Butcher was brought into the fold, it actually makes my blood run cold.  It’s well done all around, and John McCrea does amazingly cinematic work throughout the issue in keeping things from devolving into a series of alternating close-ups.

The Verdict:  Still Worth The Time

The Boys is one of the books that I repeatedly hear mocked as nothing more than anti-superhero ultra-violence, with shock value for the sake of shock value, but it’s really much more than that.  If this story were a Hollywood blockbuster, we’d be in the closing moments of the third act, as the hero finds out the villain’s nefarious plot, setting in motion the climactic scenes.  Garth Ennis has woven a complex and deep history here, drawing in real historical events and facts, pulling in his own obvious love of war stories and cloak and dagger tales, and combined it all into a truly impressive tour de force.  It’s clear that, for all the changes he’s been through, it’s this conversation that will change Wee Hughie into whatever he is about to become.  Whether that will be savior, murderer, or something entirely different is maddeningly unclear, and will keep me coming back month after month.  The Boys Fifty-Four keeps up the excellent narrative of ‘Barbary Coast’ while never losing sight of the fact that there’s unfinished business in the wings, earning 4 out of 5 stars overall. It’s remarkably subtle and nuanced storytelling, and one hell of an engrossing read.