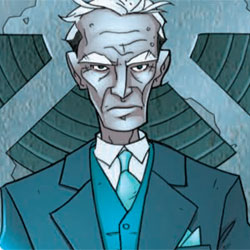 Previously in Atomic Robo: Atomic Robo, Helen, and the masked vigilante gunfighter Jack Tarot finally crack the case of the mysterious science crime spree stretching from Chicago to New York City… and it leads them right to Thomas Edison.

Time Traveling Teddy Roosevelt may be Rodrigo’s arch-nemesis, but for Atomic Robo, Nikola Tesla, and the rest of us who know what is going on, the fraud Edison is the real danger to the world. His plan is finally revealed – he plans on capturing Od energy to make himself immortal, and he’s willing to destroy all of New York City to make it happen.

Since the beginning, I’ve marveled at Brian Clevinger’s attention to detail, and actually doing real research into the subject matter to make his fantastic story more grounded in reality. Instead of making up some interesting sounding word like uru, or adamantium, the Ordic Force is one that has a basis in the belief system of the mid-19th century, and becomes the perfect catalyst for this arc. Edison believes he can capture this life force energy using his DC dynamo system, and by passing it into the stolen crystal skull he hopes to achieve and sell immortality. Clevinger adds just the right amount of over the top insanity in his take on Edison, and he truly comes off as one of the first mad scientists.

Fortunately, Tesla is there to save the day.

If you thought Tony Stark was the first to invent a suit that channels energy, wait until you check the get-up on Tesla, as he repulses the negative energy Edison is conducting through his system. Though probably not intentional on either Clevinger or artist Scott Wegener’s part, it is this kind of awesome bits of fun that makes reading Atomic Robo a joy. And if Clevinger created a mad scientist in the form of Edison, Tesla, like the AD/DC wars, is the complete opposite of Thomas. While we’ve been lead to believe that Tesla is a bit touched, he comes off as the calm, cool, and collected hero that is 10 steps ahead of everyone else in the book.

And what about Robo? He gets a few good ones in this issue, but in the end, this tale is not just about Robo doing incredibly awesome Atomic Robo things, it’s the final battle between Edison and Tesla – one that raged for years in real life. Okay, it is also about the son recognizing his father is awesome and having more respect for him at the end.

KICK-ASS ART THAT IS KICK ASS

If you have followed the adventures of Atomic Robo all these years, one thing is very apparent – Scott Wegener’s style continues to evolve, and I think this is his best yet. From the highly detailed buildings, to the more crowded streets and sidewalks, to the sterile environment of Edison’s lab, I’m drawn in to the story with each panel.

In my mind, splash pages should be big, epic, productions that take your breath away, and make you feel pumped about the story you are reading. The final page of Atomic Robo #5 has all of that in more. Detail like we’ve never seen before, a pose and angle that is a staple in heroic tales, and coloring that brings it all to life.

By now you know the routine – stop what you are doing, get your hide down to the local repository of comic books, and buy Atomic Robo. Do not hesitate. Do not hem and haw debating whether you should buy Atomic Robo or the latest issue of that cape and tight adventure with the story that has been retold a million times – BUY THIS BOOK! In fact, buy it three times and give it to everyone you know, and maybe even a few people you don’t know, good Karma will follow you wherever you go. 5 out of 5 Stars, a second heaping helping of Major Spoilers Meatloaf, and a solid high five to Clevinger and Wegener for killing Edison… again.