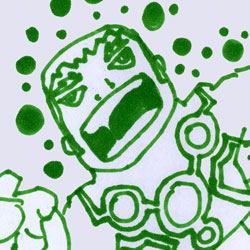 This week on the show: Jack Kirby created a unique experience in his Fourth World. The crew takes a look at the first omnibus volume, as well as discussions of new comics, Star Wars on Blu-ray, and more.

REVIEWS
Stephen
RASL #10
(W/A) Jeff Smith
Rasl makes his way back to Annie and has a cruel surprise waiting for him, and just when Rasl least expects it, Agent Sal, The Lizard-Faced Man, returns and starts shooting up a crowded bar! Rasl battles to save the patrons and the Multiverse itself!

Matthew
Walking Dead #84
By: Robert Kirkman, Adlard, Cliff Rathburn
NO WAY OUT concludes. Could this be the end?

MAJOR SPOILERS POLL OF THE WEEK
May 4th is considered the official International Star Wars Holiday, and with the recent news that has been announced regarding the Star Wars Blu-ray edition (arriving in September 2011), we wonder how many of you will rush out to buy The Complete Saga ($139.99) for your collection… again…

Jack Kirby’s Fourth World Omnibus Volume 1
After co-creating comic book heroes including The Fantastic Four and The Hulk, legendary writer/artist Jack Kirby came to DC Comics in 1970 to write and illustrate four interlocking series known collectively as “The Fourth World.”
Now, for the first time, DC collects these four series — THE NEW GODS, THE FOREVER PEOPLE, MISTER MIRACLE and SUPERMAN’S PAL JIMMY OLSEN — in chronological order as they originally appeared. These comics spanned galaxies, from the streets of Metropolis to the far-flung worlds of New Genesis and Apokolips, as cosmic-powered heroes and villains struggled for supremacy.
Volume 1 features the debuts of Orion of the New Gods, the evil Darkseid, super-escape artist Mister Miracle and many others. It also features numerous appearances by Superman.