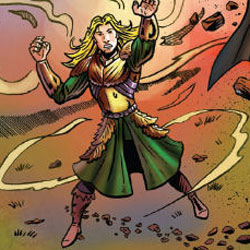 Since 2002, comic book creators worldwide recognize the first Saturday in May as the holiest day in comic geekdom. For the second year in a row, creators represented by SJS Comic Promotions are joining in the celebration with a wide variety of plans, from the creative to the traditional to the unconventional.

Three creators in the SJS family are acknowledging FCBD in the traditional style it was created for. Dirk Tiede, Rick Silva and Carl Herring Jr. will all be appearing at comic book stores throughout New England. Dirk, the creator and artist of the popular web comic Paradigm Shift, will be signing copies of his three graphic novels at Harrison’s Comics 252 Essex Street in Salem MA from 10am to 2pm. For the first 10 fans who visit Dirk at Harrison’s, he will be giving away free copies of Paradigm Shift Book One:  Equilibrium.

Rick Silva, the publisher and creator of fantasy title Perils of Picorna and Zephyr & Reginald: Minions for Hire among others, is participating for the 2nd year in the Free Comic Book Day festivities sponsored by Jetpack Comics in Rochester, NH. This city-wide event welcomes in mainstream and independent creators at various locations throughout the city for purely the love of comics. Rick will be on hand at the Knights of Columbus Hall 40 Columbus Avenue in Rochester signing copies of his books, including the recently released Kaeli & Rebecca #1 and Perils of Picorna #2. The Rochester Free Comic Book Day celebration runs from 10am to 4pm.

Carl Herring Jr., publisher and writer of The Enforcers by Three J Productions is scheduled to appear at the Free Comic Book Day headquarters of Southern Connecticut, Sarge’s Comics. The annual party hosted by Sarge’s Comics draws a crowd of almost 2000 comic fans and the store opens its doors to independent creators each year. Carl will be on hand from 10am to 4pm, continuing a series of appearances to showcase The Enforcers #2. Sarge’s Comics is located at 24 State Street in New London, CT.

Taking the unconventional approach to celebrating Free Comic Book Day, creator of Sky Pirates of Valendor Everett Soares is incorporating a modern tradition with a flair for the past. Soares will be exhibiting at the 1st Annual International Steampunk City, an event celebrating the creative and wondrous subculture that melds 19th century aesthetics with modern day technology. Soares will be signing books in steampunk pirate attire, showing off his recently released Sky Pirates of Valendor #2.2. Setting the stage for a unique Free Comic Book Day, web comic publisher Andrew Zar is planning an online version of the day-long celebration. For the entire day on May 7th, the edgy mature content website will be offering new and existing members of DarkBrain.com the opportunity to purchase a 3-month membership for $10, 50% off the regular membership rate.

Rounding out the Free Comic Book Day tour of SJS creators is the newest member of the family, Papercutz Graphic Novels. For the first time ever, the writing and artistic teams of the best-selling series Geronimo Stilton converge on the US straight from Italy. Geronimo Stilton graphic novel artist Ennio Bufi, as well as writers Foschini and Favia, will meet the readers, make sketches and sign the Papercutz Geronimo Stilton graphic novels at comics shops Lee’s Comics 1020 N. Rengstorff Avenue, Suite F in Mountain View, CA from 11:30 AM to 2:00 PM, and then from 4:00 to 7:00 PM at Atlantis Fantasyworld 1020 Cedar Street in Santa Cruz, CA. These appearances are timed to coincide with the release of Geronimo Stilton’s special Free Comic Book, which also features a full-color short story from the SMURFS graphic novel series, also published by Papercutz.