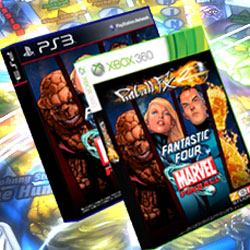 Marvel Pinball is celebrating 50 years of the Fantastic Four with the addition of its newest table, which highlights the teamwork of Mister Fantastic, the Invisible Woman, the Thing and the Human Torch!

Today, ZEN Studios announced the Fantastic Four downloadable content for PlayStation Network and Xbox LIVE Arcade for the Xbox 360, making this the very first expansion for the full game. The table will offer new achievements and trophies, operators menu, rule sheet and even social feature support. Use the powers of all four heroes to conquer a whole new set of obstacles and defeat some of the Marvel Universe’s greatest threats- including Doctor Doom, Galactus and a few other surprise guests!