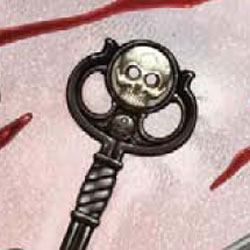 HOLY CRAP! Did they just do, what I think they did!?

This issue arrives April 27, 2011, and does contain some spoilers (but not major spoilers), so consider this your warning. Previously in Keys to the Kingdom: Once his name was Lucas Caravaggio. Now he goes by Zack Wells. He isn’t a good person. He kills without hesitation, does what he wants, thinks torture is a means to an end, and is looking to get his hands on the Omega Key – no matter the cost. Tyler Locke had it all figured out, but Zack is very sly, cornering Tyler at the point of a sharp sword.

No, really. HOLY CRAP. If you thought Joe Hill couldn’t top what he has done before, you really need to pick up this issue. The covers by Gabriel Rodriguez have been hinting at what was coming, and here it all goes to hell. People die in this issue, and it isn’t the first appearances characters like the detective who stops by Zack’s house to inquire about the death of Joseph Ridgeway. Important characters die in most gruesome ways, and don’t be surprised if you see the death of someone you’ve known since day one.

Yes, the ending is that shocking.

And it isn’t even the death of the characters that makes your jaw drop, but in the violent way the deaths are carried out. When Locke & Key first appeared, I was a little disturbed by the psychotic nature of Sam Lesser, but the way Zack dispatches those who threaten him, makes Lesser seem like an amateur (hint: Lesser isn’t an amateur). On the plus side, it’s a good thing Kinsey removed all fear from her head long ago, because it is an important factor in how this arc ends.

This arc has been twist upon twist, and the way Hill manipulates the reader until the very end is perfect.

HOLY CRAP! LOOK AT THAT ART

For years now, Gabriel Rodriguez has dazzled readers with his ability to draw environments and characters with great detail. Now we get to see how he dispatches those characters, and bloodies the environment in great detail. Pardon the pun, but it is bloody brilliant. Ridriguez nails screen continuity, and if you follow closely, every move and action has been mapped out, resulting in dynamic panels that capture split seconds in time.

BOTTOM LINE: HOLY CRAP! WE HAVE TO WAIT UNTIL JUNE!?

Dectectives – Part 2 is a brilliant end to this chapter of Locke & Key. All the tension, all the character building, all the little plot elements that have been scattered throughout the books come together in a climax that still has shivers running up and down my spine. Brilliant writing, brilliant art, Locke & Key: Keys to the Kingdom #6 is brilliant. 5 out of 5 Stars. Don’t read this issue without having read the previous 5 installments or you are going to be lost, but also, don’t let this issue slip through your fingers. This is a must buy book.