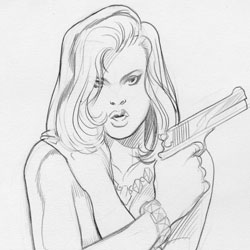 Adam Hughes art is extremely expensive for the average comic book art fan.  His early sketches are even more rare and hard to come buy, which is why the current eBay auction featuring his sketch of Jenny Mays of The Maze Agency series makes us take notice. The Maze Agency is an American mystery comic book series created by Mike W. Barr and first published in 1988. It revolves around a pair of detectives (Jennifer Mays and Gabriel Webb) and their adventures solving puzzling murders. The Maze Agency was a 1989 nominee for the Will Eisner Comic Industry Awards for Best New Series.

The piece currently has a very low price, which may make you wonder, but according to the Hughes Fans mailing list, this is legit.