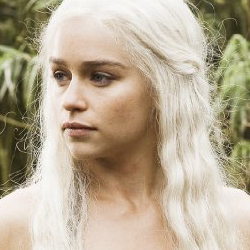 The first episode of Game of Thrones – the much-anticipated TV adaptation of George R. R. Martin’s popular series of fantasy novels, A Song of Ice and Fire – aired on HBO this last Sunday. See the review after the jump! Game of Thrones is a medieval fantasy series set in a fictional world, with most of the action taking place on the continent of Westeros. After a short prologue sequence involving men of the Night’s Watch (an organisation which, in short, guards the edge of civilisation in northern Westeros) we get into the meat of the story, which mostly centres around one Eddard ‘Ned’ Stark, Lord of Winterfell (the ruling seat in the North). Jon Arryn, Hand of the King, is dead, and so the King Robert Baratheon – an old friend of Ned’s – is riding north to Winterfell in order to ask him to take up the role. Ned accepts, begrudgingly, and continues to host the King and his party at Winterfell, during which time his wife, Catelyn Tully, receives a covert message from her sister Lysa (widow of Jon Arryn). Meanwhile, in the city of Pentos – located on a different continent across the Narrow Sea – Daenerys Targaryen is getting married. The Targaryens were the previous ruling royal family in Westeros, but about a decade ago Robert Baratheon and Eddard Stark led a (successful) rebellion against them, and now Daenerys and her brother Viserys (in his mind, the King in exile) are the only remaining Targaryens. Viserys, in cahoots with one Magister Illyrio Mopatis of Pentos, is marrying his sister to a Dothraki Khal (the Dothraki being a nomadic race of fearsome warriors, and a Khal being a leader of a group of them (a Khalasar)), as he has been promised a Dothraki army in return, to take back his homeland. The episode ends back at Winterfell, with Bran (one of Eddard’s sons, who loves to climb), discovering the Queen Cersei Lannister having sex with her twin brother Jaime Lannister in an abandoned tower.

First of all, let’s expand on that last sentence: yes, both in the books and in this show there is incest between twins, and a variety of other fairly graphic sexual activity. This episode alone features a good deal of nudity, and is definitely not something one would want to watch with one’s children. Consider this a warning that, if what has been described sounds like it would turn you off the programme, then this is probably not a show that you will enjoy.

As a huge fan of the A Song of Ice and Fire series, I was incredibly excited about this adaptation, and I am happy to say that this first episode was everything that I hoped it would be. For a start, it is – so far – very much faithful to the book (I believe the current plan is to cover one book per season); by my estimation, this first episode covers the prologue, chapters one to nine, and chapter twelve of the first book (out of seventy three chapters in all), and it certainly packs a lot in for an hour-long episode. In fact, events might be said to move a little too quickly: at one point a month passes in-between scenes, and if you don’t pay attention you might miss that fact. Another consequence of this, as well, is that a whole lot of characters are being thrown at you very quickly in this first episode, and if you haven’t read the books then it might be easy to loose track; something that annoyed me in this vein was that they didn’t name the characters enough, and I can imagine one being left confused as to who is who.

However, the Ice and Fire books have a deserved reputation for length and complexity, and this show has a lot of material to cover in the planned ten episodes of this season, so the fast pace is understandable and, of course, this is the very beginning of the series, so more is going on here than usual as everything has to be introduced. With so much going on, this series could easily have become a confused mess, and the fact that there are only a couple of minor issues with the pacing is a testament to the great job that has been done in adapting the books.

That is not to say, however, that the show is simply a blow-by-blow retelling of the novels: scenes have been added, removed, and modified so that, whilst roughly the same material is covered, Game of Thrones is an adaptation of the books, not just the books in a visual form. This first episode is remarkably good, in fact, at getting across various aspects of characters in smart, visual ways, really playing to the strengths of film. My only real complaint with the treatment of characters is that Khal Drogo appears, at this point, to be a bit more malevolent than he is in the books, but I am hoping that his softer side will be in evidence in subsequent episodes. The story itself is rather brilliant: complex and compelling, this first chapter sets up most of the major plot points for the season to come, and will no doubt have any viewer hooked.

The sets and locations all look wonderful – bringing to life the vividly-described world of A Song of Ice and Fire. From snowy moors to deserts, the show manages to make them all look convincing, and the same is true of the indoor locations. The costumes, too, are all excellent.

With such a variety of characters, there are also a variety of performances on display, and all of them are never less than decent, with most being downright good. Particular highlights are Sean Bean as Eddard Stark, and Emilia Clarke as Daenerys Targaryen. The majority of the characters are so wonderfully brought to life that I cannot wait to see how yet more Ice and Fire characters are treated in subsequent episodes.

Overall, if this first episode is anything to go by, Game of Thrones is going to be a really great TV series. A compelling story, phenomenal characters and brilliant execution make this a show you’ll definitely want to watch. Fans of the books, have no fear: this is a great adaptation, and if you’ve never ventured into the realm of Ice and Fire before, then I urge you to do so now. Thus, Game of Thrones, episode one, receives five stars out of five from me.

You can catch the next episode of Game of Thrones on April 24th.