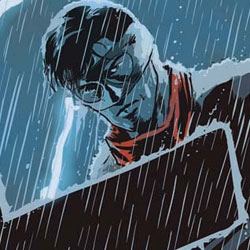 REVIEW: The Lone Ranger: The Death of Zorro #2

Zorro is dead, the villains are holed up in an abandoned mission, and have made the local Indian tribe their servants. This would certainly be a downer of a story if The Lone Ranger weren’t involved. Previously in The Lone Ranger: The Death of Zorro: The local Chumash Indians were living a peaceful existence in an abandoned mission in Southern California. It seemed like a good life until a group of Confederate soldiers arrive and take over the place. Fortunately, the mission is only a few miles from Don Diego de la Vega’s home. Unfortunately, Zorro is an old man and having no honor, the Confederates shoot Zorro in the back, ending the career of a great hero. But wherever there is injustice, a hero will appear…

THIS ONE TIME, MY FATHER MET ZORRO

If there was ever an issue that was a complete downer, this is it. Not only do readers see the decaying body of Zorro laying out for all to see, but the huge Gatling gun mounted at the highest point of the mission is keeping everyone at bay. With the help of his companion Tonto, The Lone Ranger does manage to get the body off the compound and back home to Don Diego’s grieving widow.

Considering the time period of the title characters is so far apart, I was wondering how Ande Parks was going to tie the two characters’ histories together. We get the answer in the form of a tale John tells of the time Zorro helped his father recover some promised money needed to start his own ranch in Texas. The even instilled a sense of duty and justice in the father, which was then passed to the son(s) later in life. It’s for this reason that The Lone Ranger is willing to bring down the hammer on the Confederates.

Of course one man can’t do it alone, and the end of the issue introduces readers to a group of heroes we haven’t seen since Zorro: Year One.

Maybe because most of the issue takes place at night, but the crushed blacks I’ve been complaining about to no end in every Dynamite Entertainment book isn’t so bad here. In fact, the art is pretty awesome despite the macabre nature of the stories being told. I like how the story gets really dark, and then by the end of the issue, things do get brighter.

The layout is very traditional, with composition not deviating too far from what we have come to expect in comic books. And this works, as there isn’t any reason to use overly dramatic poses, or extreme shots to get the message across.

I didn’t think i would enjoy this series that much, but now that the story has made the turn from a vague revenge plot to an all out Revenge, Incorporated story, I’m very interested in seeing how all the players will come together to bring justice to the baddies. The Lone Ranger: The Death of Zorro #2 is worth checking out, and earns 4 out of 5 Stars.