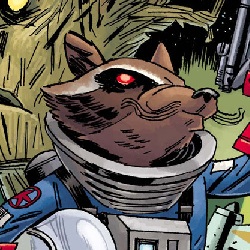 Can the horrible forces of the Dire Wraiths be quelled without the aid of ROM, Spaceknight? The Annihilators and their newest ally, the Galadorian Spaceknight Ikon will find out, soon enough; and Rocket Raccoon and Groot find that going home is never easy. So take the jump faithful Spoilerite, and see what’s in store for our Gallant Galactic Guardians! Previously, in Annihilators: The newly formed team featuring Cosmo, the Space Dog; Gladiator; Silver Surfer; Ronan, the Accuser; Quasar; and Beta-Ray Bill were brought together by the dying Star-Lord to be the most powerful team in the Universe. With the introduction of Ikon, a Spaceknight from the planet Galador troubles mounted for the team. For Dr. Dredd, a long thought lost sorcerer, has returned and so has the galactic threat of the, DIRE WRAITHS!

Meanwhile, Rocket Raccoon is on the hunt to find out why a Killer Clown made of Sentient Wood tried to kill him, and at the same time, try and rescue Groot who has convicted of Tree-son by his planets elders.

A DARKNESS SHALL FALL UPON THE LAND

With the dreaded Dire Wraiths unleashed upon the planet Galador, the powerhouse team known as the Annihilators, and the Spaceknight Ikon, enter the fray and battle Wraith spawn such as Deathwings, and Hellhounds. As the brute strength of the team attempts to hold off the incursion of the Wraiths “Black Sun”, which feeds their sorcerer abilities. With a hidden threat among them, the heroes journey is not over, not by a long shot.

In the Rocket Raccoon tale(no pun intended), Rocket is still on his mission to free Groot, with the aid of a stolen “PDA”. Rocket journeys to save his buddy, from the metallic fire breathing woodpeckers, and along the way meets up with the planets resistance movement just in time, as another onslaught of Killer Clowns jump our crazed Raccoon protagonist.

First off, this issue packed with story. Not for one second did I feel cheated, and I was entertained through out. The space opera genre to the team of Abnett and Lanning, comes as natural to them as breathing air. The characters presented are powerhouses from all across the Marvel Universe, but they are not blunt, or boring, they have their own eccentricities, and I love them for that. Even someone like Gladiator, who to me, was at a time as bland as No-Name Brand White Bread, comes off as interesting within these pages. I give that credit to the writers.

I have to say that Rocket Raccoon back-up is reason enough for buying this comic. Rocket’s journey to, and on Planet X, the capitol of the Branch Worlds, is nothing but pure excitement. The pacing is immaculate, and the starring power of our leading critter has never been more apparent. As for his bestest buddy Groot, I have no way to explain why I like the character, he only says “I AM GROOT”, and either a shortened or exclaimed variation of that statement. But for a living tree Groot really rocks, he goes from being burned by Robo Woody Woodpeckers from Hell, to shooting a Killer Clown in the face with a machine gun. Where else can you get a walking tree shooting a machine gun, along side a raccoon dual wielding pistols?

LOOK AT THE BLACK SUN RISE!

The artwork for both stories within this issue is the cream of the crop. Tan Eng Huat and Victor Olazaba who provide the art on the main Annihilators story are a great pairing. The artwork is flamboyant, and really stands out, not relegated to the droning art of the space comics of yesteryear. The epic flair of the Annihilators themselves just drives home how much of a rollicking good time the story is, seeing Beta-Ray Bill put a Dire Wraith Deathwing in a choke hold is just as cool as him whipping up a massive storm to blot out the sun. Every single character that Huat and Olazaba bring to life is to some degree given a zest, that jumps off the page, as if they chugged 10 Four Loco’s one after another. Suffice to say, no character is left behind.

Timothy Green II provides the artwork on the Rocket Raccoon/Groot story, and his depiction of Rocket is too dang perfect. He’s cute, but Timothy is able to make him come across a critter you don’t want to piss off. Those expressive eyes, those dainty paws, and the way he is so fluent with a gun, as he should be since he is Rocket Raccoon after all! As Groot really comes to life in the is issue, all emotive, since he is like a mime, all except for the “I AM GROOT” part. You have to have some kind of mastery of being able to tell a story without words, to allow a characters to express themselves, and with Groot that is a must. Every little emotional tick is dead on, despair, pain, anger, happiness, all can be seen on Groot’s emotional trunk with the help of Green’s artistic prowess.

The whole Annihilators experience was complete and fulfilling to the utmost extent. I loved the first issue, but this installment is able to fulfill the promise given by the first issue, and I have no doubt that the third issue will do the same. The simple fact that the creative team of Abnett and Lanning are able to weave in the threads sewn by Bill Mantlo in his ROM, Spaceknight run is something that simply brings a smile to my face. I am a ROM fan, I won’t hide it, and being such a fan makes me a fan of all the ancillary world that spun out of the comic, and here it’s brought to forum that’s not relegated to back issue bins, and the musings of aging fanboys.

The way each story ended in both issues is just great. It leaves you wanting more, like a good pusher they know when they have you hooked, well, at least I know I am. The whole package is hard to snub my nose at. I was gladly surprised that there was nothing to dislike about this issue, it’s so rare that I don’t feel like wasted money. But when you get basically two full issues worth of a great stories under one cover, for one dollar more than your average comic, I will call that a winning combination.

Annihilators #2 receives and astronomical 5 Stars, out of 5.