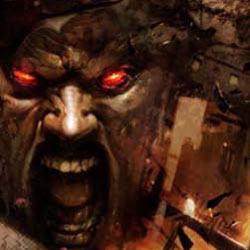 Radical Publishing sent Major Spoilers a sneak peek of Earp #3, Ryder on the Storm #3, and Abattoir #4.

Ryder, Katrina and Monk are only a few steps away from eliminating the Daemon threat. The only thing that stands between Ryder and the Drone Queen is his mother – the Daemon Rebecca Danton. Can Ryder choose between his family and the human race before the Drone Queen unleashes her curse upon the entire world? And even if he chooses to save the world, how will he pull it off with an army of Daemons standing between him and the destruction of the Drone Queen? The stunning conclusion to David Hine’s newest horror mystery ends here!

After refusing to sell a house with a violent history to an eerie old man, Richard Ashwalt’s life is coming apart at the seams under mysterious circumstances. Now separated from his family and falsely accused of murder, Richard is at his wits’ end. Trying to make sense of what’s happening around him, Richard seeks Jebediah Crone, the man who began the course of events that have left Richard’s life in shambles and driven him to the brink of insanity. As Richard investigates Crone and the mysteries that surround him, the pieces of a horrifying puzzle begin to fall into place— but does he truly want to solve it?

The stunning reimagining of the wild west’s greatest lawman continues! The A.O.K. is in ruins. Wyatt’s brother, Morgan, lies dead while Josephine has been kidnapped by the Pinkertons, with Mayor Flynn pulling the strings – but Flynn and the Pinks made one huge mistake: They left Wyatt alive. Now, Earp and his erstwhile nemesis, the notorious Jesse James, must join forces against Flynn and the Pinks to save the woman that they both love. Can Wyatt face his demons to avenge his brother, rescue his love and rid the city of Flynn’s corruption for good?

Please feel free to share the 8-page previews for each of the books attached to this email; however, Radical would appreciate your discretion in keeping the full downloads of our books confidential. If you decide to review any of these books, if it would be possible for you to email me the link to the finished article, that would be greatly appreciated.