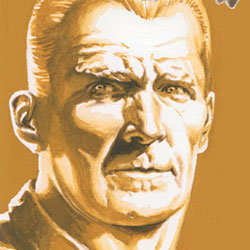 DC’s First Wave mini-series is over, but that doesn’t mean the company can’t go back to the well to see what is going on with Batman, Doc Savage, and The Avenger. Previously in First Wave: Brian Azzarello came up with the brilliant idea to take all the great pulpy heroes of the ‘30s and ‘40s and put them on their own Earth in DC’s Multiverse, and spin a yarn so large and so spectacular, that it would surely usher in a new Golden Age of comics for fans world wide.

Too bad it didn’t work out that way.

The idea was there, but at the end of the day, I doubt the series sold enough to pay for the licensing rights to the characters.

This story is set in New York City, after “the war”, with crime on the rise. Gang warfare is running rampant, and as the Mexican gang and The Syndicate escalate the violence, people are scared to venture out at night.

This issue reads like a video game, The Avenger begins with a low-life who has recently been released from prison, and before the reader knows it, he’s targeting Shonder Zeev, the head of the Syndicate. If The Avenger is able to avenge one of his clients and kill Zeev, it will upset the balance of power in the city, causing more death and destruction.

The story has a vibe one would expect to see in a Chuck Norris or Charles Bronson film, and it hits in all the right spots – and then kicks it up to eleven when Batman and Doc Savage step in.

There is no bizarre mixing of technology. No special gadgets or gizmos. No giant robot army or underwater city ready to blow up the coast. Instead, Readers are offered a great stand alone that features a car driving off the Brooklyn Bridge and Doc Savage getting socked in the face. To put a cherry on the top of this wonderful comic book sundae, Batman is the voice of reason!

Bringing this tale of street level justice to life is the art by Phil Winslade. There is a ton of detail in every panel, and the facial features are rich with expression – well, except for Richard Benson… duh…

If I had one complaint about this issue, it is in the way that Doc is rendered. I’ve never been a big fan of the close-cropped skullcap haircut, and felt this could have been a great time to bring back the old coiffure. There are also a few panels where Doc’s ribcage is so large, the transition to his waist gives the illusion that he swallowed a basketball and it got lodged in his chest.

BOTTOM LINE: BEST BOOK OF THE WEEK BY FAR!*

This – THIS – is what First Wave should have been. Forget the mixing of technology, forget the globe spanning crises that requires characters to leave their natural environments, forget trying to cram in pulp characters simply to get people to point and look. This issue told an excellent story, kept everything in one time period, and limited the cast to a few of the big names. It worked, and it worked so well, that I’m glad this issue slipped into my buy pile. A brilliant story of revenge, the flash and bang kept to a minimum, and art that stands up well earns First Wave Special #1 5 out of 5 Stars.

This would be a good time for DC to sit down and examine this issue closely to see why it worked so well, then see about bringing the series back as a bi-monthly or quarterly title that keeps fan interest alive… as long as the story is a good one.

* Yes, I realize this is probably a big claim, but damn this one hit it out of the park.