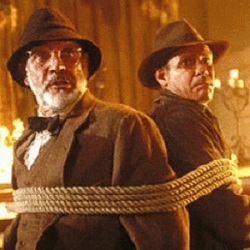 TOP TEN: Sequels That Hold Their Own

At times there seems to be a stigma attached to movie sequels. A lot of the time they have no purpose other than to capitalize on the name recognition of their popular predecessor. But there are times where the sequels live up to what has come before, or even surpass it on some occasions. Take the jump and see which movies made the cut, and Breakin’ 2: Electric Boogaloo sadly didn’t.

When Marvel Studios produced the first Iron Man starring Robert Downey Jr. the critical, and fan(boy) reaction was so positive you could practically print money. When they followed it up with the sequel that replaced Terrence Howard, who played James(War Machine)Rhodes, with Don Cheadle things could have been awkward, the movie could have stumbled, but it didn‘t. Building on the mythos set up in the first movie, and expanding on the Iron Man universe, and in result the Marvel Movie Universe as well. Iron Man 2 brought the funny, the action, and bucket loads of character development, and in my opinion is a better movie than the first. I would rather watch Iron Man 2 over Iron Man any day.

“Life will find a way”, and it did on the back up “dinosaur island” Isla Sorna. As Spielberg and the fans of the first Jurassic Park clamored for more, they got it, with a not a double, but quadruple shot of dinosaur goodness. When comparing the first movie to The Lost World the one thing we all came to see was more dinos, and that’s exactly what we got. They looked more realistic, had a wider variety, and had more of a role, and where not, what some might consider, glorified scenery. All while culminating with a T-Rex rampage through the streets of San Diego, puts to shame the Visitor Center escape.

Some might not know but Desperado is a sequel to, El Mariachi, but where the previous installment was more akin to a student film with some John Woo influences. The sequel takes off like a rocket, with a healthy dose of gun-fu, a nude Salma Hayek, and a over the top drama. The way the Desperado sets up it’s environment, and it’s cinematography are far above what came before, the pacing is good, and allows for the movie to breathe before a clip or three of .45 slugs are pumped into a goon. The construction of the movie is such, that you really don’t need to see what came before to get the whole story, and that’s a good thing.

SAINT Number 5, is a robot built to kill but is struck by lightning and gains a soul, after escaping his creators who want to disassemble him. With the help from the weird girl from the Breakfast Club, and Steve Guttenberg, he dubs himself Johnny 5, and drives off into the sunset. Now with Johnny’s newly acquired soul, he is brought to New York City, to help Ben create toy replicas of himself. Johnny is a innocent to the world of man, having a voracious appetite for input of all kinds, this blinds him to the wickedness of man, who use him to commit crimes. This movie runs the gamut, on the surface it’s a comedy, but at it’s core it touches on what it means to be human, how science fiction should. When Johnny is mortally damaged, he realizes the value of life, and what’s right and wrong, he dons a “punk rocker” look, and goes out to get revenge. In the end, Johnny 5, now gold plated, becomes a Citizen of the United States. The movie pulls on heart strings at times, and pushes the first aside, and I am not just saying that because it had Steve Guttenberg in it.

John Woo’s follow up to the gun-fu spectacular that preceded it. It’s a story about how no matter how much you try to change, there will be people to try, and sometimes drag you back into a life that is detrimental to your spiritual, mental, and physical well being. As the first movie ended in a blood bath, the sequel would have been kind of hard to make but they pull out the “twin brother” trope and push on ahead. The movie can be called mindless action, but out of mindless action, you want to be the best, and this is. With an ending that is a bloody poetry of gunfire, and blood, that is so much more satisfying than how the first A Better Tomorrow ended.

The first “Dead” movie took place in a Farmhouse with everyday people, the second in a Mall with Cops, and encroaching criminals, and the this one in underground bunker, with the military that has structurally, and mentally fallen apart. With power corrupting, and insanity growing, the isolation and the hostility was never more present, with a tyrannical gun totting madman running this bastion under the Earth, metaphorically into the ground. What makes Day of the Dead stand out more than Dawn of the Dead(1978), is the stark take on surviving the zombie apocalypse, and humanizing the undead, showing that just because they devour the flesh of the living, they still have a sliver of humanity left within them.

4. Indiana Jones and the Last Crusade

Back with the good ol’ hated Nazi’s and Father issues, Last Crusade builds on Indiana’s world with the genesis of his fedora, and fear of snakes, within the first 15 minutes of the movie. Attempting to rescue his some what absent minded father, brilliantly portrayed by Sean Connery, Harrison Ford has not lost a single drop of charisma. With adventure, and death traps, and that live up to Raiders, it’s not what makes this a good sequel it’s the interaction of estranged father and son. With so many locals that give a visual zest to the movies search for the location of the mystical Holy Grail, it signs with a pulpy tone that sends up the serials that inspired the franchise.

Picking up after the somewhat remake/sequel that was Evil Dead II, Army of Darkness takes Ash’s war with the “evil dead” back to middle ages England where he has to become a hero of the people, that initially throw him to his death. With the tongue in cheek humor that in varying degrees, populates the works of Sam Raimi, Army of Darkness accomplishes the goal of making Ash a badass without, making him a total fool. With send up’s to the works of Ray Harryhausen, with the undead horde created due to Ash’s inability to remember three simple words, making the hero a flawed and brash character, which makes himself his own worst enemy. Now with Ash not being confined to a cabin in the woods, and having the put up with “Primitive Screwheads”, Ash’s cockiness comes to the forefront, and really shines due to Bruce Campbell’s ability to inhabit “The King“.

After stumbling with Star Trek: “The Motionless Picture”, the choice of antagonist and plot move past a thinly veiled 2001: A Space Odyssey clone, and pick up with Khan Noonein Singh and his powerful thirst to exact revenge on Captain James T. Kirk, and the crew of the Enterprise. With the cast of the Star Trek returning, and Ricardo Montalban once again portraying Khan, a memorable character from one episode(“Space Seed”) that aired 15 years previous.

All of these perfectly fitting pieces, made me forget the blandness that plagued Star Trek’s first theatrical outing. With the disturbingly uncomfortable scene of the mind controlling eels borrowing into Chekov’s and Terrell’s ears, still makes me shutter to this day. To the passing of our favorite Vulcan, Spock, as he saves the lives of his friends, and fellow crew, from a reactor core breach. A touching farewell, that helps makes this movie hold much more emotional weight, than the first, and also served to launch a trilogy of movies that redeemed the Star Trek movie experience.

1. Star Wars: The Empire Strikes Back

What? You expected Godfather Part II? Empire is my favorite of all the Star Wars movies, all three, of them. Empire has a deeper, and darker story that isn’t as whiny or coated in tons of Joseph Campbell lacquer, the lacquer is still there in Empire, but not as noticeable. Now with the Empire nipping at the heels of the Rebellion, there is no time for trivial matters like going to Tashi Station for Power Converters. The overwhelming might of the Empire can be felt with the thunderous foot falls of the AT-AT’s as the move in the quell the Rebels in their base on Hoth.

When our heroes scatter to the four corners of the galaxy and Luke is trained by the wise Yoda, to confront Darth Vader that whole sequence has much more meat to it than Star Wars did with the interaction between Luke and Ben. But the ultimate reason this movie works as a sequel, and does better than Return of the Jedi, is that is sets up the tent pole of the Star Wars universe with(SPOILER)Darth Vader being Luke’s father. After all is said and done Luke has to become more like his father, Han is carried off my Boba Fett to Jabba’s palace, and Rebellion has a new ally in that of Mr. Colt 45 himself, Billy Dee Williams. With ROTJ following Empire, the pandering to the audience was in full effect, with merchandising being on the brain, since according to Spaceballs, “That’s where all the money is”. I’ll take my frozen Hoth any day, over the woodland critters insurgency.