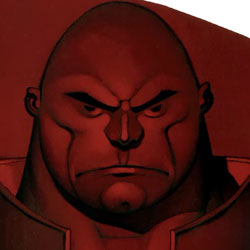 This week on the show: Skulls get kicked, Family Guy gets a comic, John Williams dissected. Plus, three guys talk in funny voices… just to annoy you.

REVIEWS
Stephen
Orbit: Howard Stern #1
Writer: CW Cooke
Pencils: Kent Hurlburt
Howard Stern is the man behind the microphone. The man behind the curtain. He is the voice of a generation, the voice of dissent, the voice of the people. He says what we all want to say and does what we all want to do, and people love him for it. In the public eye for years, he’s still an enigma, even though his story has been told in movies and on his program. Get the scoop on his life from his beginnings in local radio to his current show. Bababooey bababooey Howard Stern is it!

Rodrigo
Enforcers #2
In this issue written by Herring Jr. and illustrated by Tod Smith, Drug Lord Anthony Marcus makes the first move by trying to smuggle some high-powered weapons. What he doesn’t realize is retired cop Tunney gets involved and manages to intercept the exchange. Still connected with the NYPD, Tunney tips off Detective Clayton Jagger. After an invitation to meet with Senator Lawrence Fulton and an unexpected seizure, all signs point to impending storms.

Matthew
Secret Avengers #11 Story by Ed Brubaker Art by Will Conrad Colors by Rain Beredo Cover by Mike Deodato & Rain Beredo
The secrets of John Steele and his link to the Shadow Council are revealed in a special two-part World War Two espionage adventure!  Also starring Captain America and the Prince of Orphans, deep behind enemy lines!

MAJOR SPOILERS POLL OF THE WEEK
When it comes to popular movies in our culture, it is amazing to see how many of them had John Williams composing the theme song.  Today, we deviate a bit and ask you to pick the better John Williams theme song from the two contenders.
VOTE![poll id=”177″]

SkullKickers Volume 1
Two nameless mercenaries are mashing monsters and making a name for themselves. Image’s new hit fantasy action-comedy series has gone through multiple printings of each issue released so far and is getting rave reviews from readers and critics alike. Pick up the first collection and find out what all the excitement is all about!