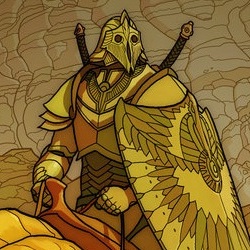 MMORPG’s are an addictive past time, that consume peoples lives more than they probably should. But is the world of Elf’s, Fairies, resurrection fees, and XP boosts any better than the life you currently live? And could it lead to ruin? Previously, in Nonplayer: Nothing, it’s the first issue, so just dive in and enjoy.

Dana Stevens is a girl that’s wrapped up in the RPG world of “Warriors of Jarvath”, something that makes up for the fact that she delivers Tamales, and still lives at home with her Mom, and kid sister. In the world of WOJ, Dana is a elite assassin, a role that she really gets into character for, but when something wonky happens within the game, the way thing are viewed within the game, and possibly IRL may have drastically altered.

Once introduced, Dana is a powerhouse of a character that has a metaphorical pair of brass cajones, she is a leader, and a strong one at that. But Dana has this sadness about her, that bubbles up to the surface. She loves to play WOJ, but she came across to me as someone that is relying too much of this world of fiction. Becoming too absorbed, and that can be dangerous, she seems only truly happy when she is shunting her problems, and wrapping herself within this fictional safety blanket of sorts.

The other characters within are placed on the back burner, the only other one that gets some really memorable characterization was King Heremoth, someone that should play a major role in future issues. As with Dana’s mother and kid sister, it’s shown that Dana does have feelings for them, but she really comes off as a brat when interacting with them.

Nate Simpson clearly has a love for detail, it’s abound within this comic. Two other artists came to mind as I read this comic, Moebius(aka Jean Giraud), and Jose Ladrönn, both of which are known for crafting beautifully rendered characters, and worlds in which they inhabit. The detail within the comic, was at times, a little overwhelming, almost to the point that a reader could get a panic attack from all the action that is being depicted upon the page.

I am not exaggerating when it comes to the detail in this comic, it is clearly in the European comics style, where the everything is so lavish, and looks like it took many months to complete this issue, and for all I know, it probably did.

There are multiple pages in which the detail can take your breath away, take for example when the gargantuan transports that house these “saddle palaces” upon their backs for the King and Queen. When one of these gargantuan pack animals are toppled, splinters of all shapes and sizes, leaves off trees, gravel, scattered guards are all thrown asunder, you can whip out a magnifying glass and still probably miss something.

The colors for this comic evoke almost like a dream atmosphere, which is highly appropriate when dealing with the realms of magic. But even in the real world the color pallet really sings, able to make the detailed images really come to life, and stand out in the crowd. The coloring isn’t your standard affair, everything is soft, somewhat “foggy” but this doesn’t hinder the line work, it enhances it, accomplishing the goal of color within comic books.

I have never played a MMORPG, and I don’t have any plans to do so. I have seen what it has done to people, they are a addiction, you get so self absorbed within the world you have created, your real life takes a back seat, and nine times out of ten, so does your hygiene. That being said, I was able to get into this world that Nate Simpson has meticulously crafted with the ease of slaying a Level 1 Demonic Imp, with a Level 74 Sword of Holy Banishment.

I do my best not to get comics for the art’s sake only. I like to try and have a total package, but then there are times when the story is good but the art is so much better, and the story becomes a reason to show off what the artist can do. In this case where the artist, is also the writer that is a easy transition, and when the art he wants to show off is jaw dropping, who would say no to that?

But as I await future issues of Nate Simpson’s Nonplayer something strikes me in the back of my mind. How long will I have to wait? Now with European comics, you get it when you get it. It may take months, or years but when it’s done, you get the whole shebang.

When the same method is applied to American comic books, things tend to go south in a hurry. No matter how much interest may be garnered from the first issue, if it takes six months, to a year to see issue two, there is a possibility that no one could care. But I hope that’s not the case.