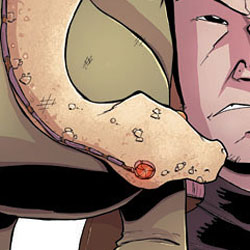 Is Director Applebee trying to kill Agents Chu and Colby? Well, yeah, but we knew that already. And there is  other stuff going on… find out after the jump. Previously in Chew: Flaming letters have appeared across the sky and the FDA has made these their number one priority. Enter Tony Chu, the cibopath, and John Colby, the cyborg. They have recently taken down a food fight murderer at the Tony’s daughter’s school, and are now being sent on one deadly assignment after another.

As with most of the other issues (mayhap even all of them) we start with a prologue, this time 18 months in the past. Caesar and Savoy are meeting with the voresoph, Daniel Migdalo, about a dead agent who has uncovered a North Korean ploy to recreate the avian flu that sent the world into a mess to start with. Migdalo’s opinion, the General who has it is too far off (about 18 months) and too stupid (definitely stupid) for them to worry about. I like these little prologues; they are an interesting way to get some extra story without taking too much focus away from our heroes.

The case of the mad Mounties and the dosed maple syrup and the Scout Troop that was actually an apocalypse death cult are just two of the totally (also awesomely) over the top cases that Chu and Colby have been sent on recently by their douchebag boss Applebee. Too bad when Colby confronts him they’re already late for their next suicide mission. And Applebee is just oozing with smug glee, Layman hams him up perfectly and Guillory got the look spot on.

Well, this mission is a joint one with the USDA, who are apparently all huge breasted Amazons (seriously, even the old director lady was a perky DD) with super-trained pets (such as a parrot, a lizard, and a goldfish? Wait, what?), and actually is a suicide mission, the director expects no more than half of them to return. The FDA (that’s Chu and Colby for those late to the game) is only there on the barest off chance that the mission goes tits-up as the FDA has a secret weapon. The mission goes tits-up (surprise there, huh?) and Chu uses the weapon, which turns out to be . . . completely and totally awesome with the best design story ever written, however I’m not actually going to give you this spoiler as the surprise is very much worth the wait. If you pay attention though, Layman does a good job of dropping just the right hints.

Guillory is a fan-frackin-tastic artist. It took me most of the first trade to get used to his style (mostly cause I’m and idiot sometimes, okay most of the time) but damn, are his faces ever expressive. The man could relay a full story without Layman having to give him any dialogue. Also, the random animals are just as good, being both a bit cartoony and just realistic enough at the same time.

BOTTOM LINE: WHY DON’T YOU HAVE IT YET?

Layman and Guillory are crafting an epic piece of work. The writing is superb, the characters are all deep and thought out, and the overall all idea of what is happening is jut awesome. I honestly can’t recommend this enough, but I think the overall awesomeness that is Chew, and the fantastic set up this issue gives us deserve 5 out of 5 stars.