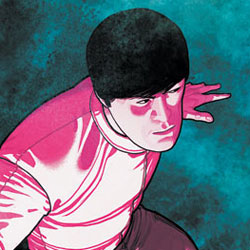 DC Comics relaunch former-Milestone title Xombi for a new millennium. Welcome to a world where the title character’s ‘powers’ are the least strange part of this entire book. Oh, he’s infused with nanotechnology that makes him perpetually physically optimized. What the hell am I talking about? Oh, just cut to the chase and make the jump! Previously: Xombi was hatched in 1994 within the pages of DC Comics’ Milestone Imprint, Xombi #0. The brainchild of recently deceased Dwayne McDuffie, the original book was written by John Rozum. Xombi tells the story of David Kim, a man transformed. He is exposed to nanotechnology and hence becomes a biotechnological force for good. 17 years later, Rozum returns to pen the latest incarnation of Xombi’s adventures in a world gone mad.

Your Mind Will Be BLOWN – Sandwiches Transform!

Xombi wastes no time before pimp slapping the reader with quirky weirdness. The world as we know it has been pierced by random acts of bizarre reality-bending shenanigans. Subjects from famous paintings cross over and begin feasting on one another, people get weird powers by reading books, and perhaps the most sinister event is the transformation of a trucker’s sandwich that changes from pulled pork to tuna fish.

In full disclosure, I have not read the original Milestone series. Starting out with a new #1 issue 15 years after the first series ended, I would expect to have some catching up to do. However, the amount of ancillary information shared within these first 22 pages is overkill. Too many characters, stilted exposition and examples of witty wordplay leave me cold. This book attempts to channel the chaos magician styling we’ve come to expect from the mind of Grant Morrison.  Unfortunately, it comes across as a pale imitation.

Why Should I Care?

Tangential relationships between characters are pivotal storytelling elements that are used to form the book’s plot structure. Unfortunately, there is very little context for these relationships and what little information that is imparted regarding friendships (such as the one Kim shares with friend Chet Flynn) does not impact any moments of tension within the story. In other words, I don’t really care about these people, no matter how weird they may be.

Artist Frazer Irving has a bit of recent history working with Morrison in Batman and Robin, making this creative team’s pairing oddly appropriate. Irving’s art is well crafted and his character designs are effective. The coloring employs a reoccurring palate of Magenta, an interesting stylistic choice that helped shape my overall opinion of the book; Xombi is trying too hard to be cool.

Besides Irving’s art, another positive attribute for the book is the fact that you get a dense, 22-page reading experience for your $2.99. For the life of me, I can’t figure out why this wasn’t released under the Vertigo imprint. I can’t see Xombi crossing over with other canonical DC heroes, so why released it under DC proper? I would think we might have learned a valuable lesson with cancelled DC Universe titles Simon Dark and The Mighty.

I admire what this book sets out to do, but the final product doesn’t do much to compel me to make future purchases. It reads like Morrison-lite and although the art is pretty to look at, the story never really gets its footing. Xombi #1 receives 3 out of 5 stars.