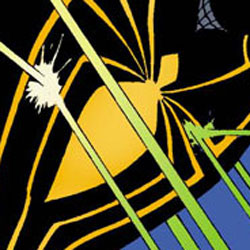 Big Time has come to an end, but did Spider-Man make the big time, or did he make a big time mistake? Dan Slott spins a tale of anger, loss, and Spider Armor in The Amazing Spider-Man #656. Previously in The Amazing Spider-Man: Having vowed to never let anyone die again, Spider-Man is confronted with The Walking Massacre – a psychopath who doesn’t mind killing just to kill. So much for that brilliant plan.

The Walking Massacre’s story isn’t a new one – way back in the Phineas Gage had a railroad spike blow through his head. He survived like nothing happened, but his demeanor changed drastically. Unable to cope with the loss of his ventromedial region, Gage became an anti-social misfit even though he was able to function normally. Something similar happened to Marcus Lyman, and the only way he can cope is by killing people. He gets what he wants, or people die.

Mayor J. Jonah Jameson, who recently lost his wife during Alistair Smythe recent rampage, is taking it upon himself to be the judge and jury in all matters concerning those who take a life. His eye for an eye approach to dealing with criminals is one that resonates in today’s world, as citizens demand blood whenever someone commits a heinous crime. In a sense, Jameson has become the mad mob, looking for retribution. His orders are simple – kill Massacre on site, no trial, no prison time, no questions asked.

It seems to be a solution in dealing with super criminals, and a topic that comes up at the comic shop counter on a regular basis. When the climax of the issue arrives, Spider-Man does keep his promise – no one dies. A solution that angers J.J. and raises the hero to yet another level.

It may have been interesting if Spider-Man would have taken the “I won’t kill you, but I don’t have to save you from being killed by the police” approach, but Dan Slott sums up the heroes don’t kill argument nicely. It’s a solution that will certainly have more serious repercussions down the road.

With my introduction into the mainstream Spider-Man universe served up with art by Humberto Ramos, Marcos Martin’s style is on the other end of the spectrum, and I’m still not sure I like it. The simple lines and rough faces, along with the flat coloring works as a single issue, but not something I’m sure I personally will like over an extended period of time – but that is me; others certainly dig on this style and I can appreciate the work that went into the tale.

Dan Slott continues to tell a spectacular tale in an amazing way. The web he weaves has me hooked, and Spider-Man’s adventures seem more interesting because of his work. The new armor is not a brand new look, but considering we’ve seen three different costumes in this giant arc only once or twice, fans will more than likely see the red and blue than anything else. The art is very subjective, and may not work for everyone, but as always, your mileage will vary. Overall, I think The Amazing Spider-Man #656 is worth picking up, and earns 3.5 out of 5 Stars.