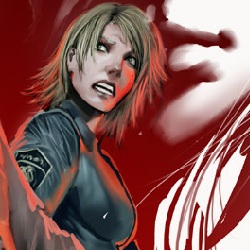 When the star of said comic, Sara Pezzini, wielder of the Witchblade, shows up in her own comic as a guest star only, it might not end well. Can her partner, and lover Detective Patrick Gleason hold this comic up all by himself? Or will the lack of a buxom, gauntlet wielding female doom this the title to become Witch-bland? Take the jump and find out. Previously, in Witchblade: Detective Patrick Gleason, the boyfriend of Sara Pezzini, the wielder of the Witchblade, headed to Upstate New York to meet a friend, and he also met Deputy Kate Rooney. While in Upstate New York, Patrick is asked to escort a prisoner, Mafia Hitman Vince “No Prints” Petramale back to the city. But things go wrong when the entire station is slaughtered, while Vince is behind bars, and if things couldn’t get any worse, a pack of Ghosts show up to menace Patrick and Kate.

With Patrick, and Kate trying to find a way to survive their spectral encounter, Patrick realizes that without the assistance of Vince, they might not make it out alive. Fighting his very nature as a officer of the law he lets Vince out of his handcuffs, to make him useful in their escape. Fleeing the confines of the massacred Police station, they make a break for the woods as the ghosts are in hot pursuit, they soon discover why Vince, claimed he was innocent of killing those people.

The story is good, the last Witchblade comic I read was about a decade ago, and the quality of writing was never this good. Even for missing out on the first part of this two part arc, the recap page caught me up to speed very well, and within the first five pages, I felt I knew who Detective Gleason was. I understood, and enjoyed the situation that he was in, fending off a swarming pack of ghosts with only a 9mm Glock, and not a Proton Pack in sight. The back-story for the featured ghost is well constructed, that of a Revolutionary War Loyalist to King George who was hung for his treachery.

Though I liked the buildup, the resolution fell a little flat with me, I know what happened, had to occur, but that doesn’t mean I can’t have reservations about it. The sexual tension between Patrick and Kate seemed a little forced, and as Short Round said, “No time for love…”, especially when minutes later you could be knocking on deaths door.

The artwork here is pretty good, Matthew Dow Smith is one of those artists that pop up on projects every now and then, and when that happens it’s a pleasant surprise. The people come off very well, they all emote as they should, Vince is cold, Patrick is determined, and Kate, is concerned. While the contrast of black and white of the issue may be a problem for some, I feel that it fit’s the story well, and almost gives it a Hellboy Universe vibe to it.

While everything else seems to click into place, the lynchpin of story is the terror of the ghosts that will kill them if they get too close. But these ghosts are not really that scary, they come across as something out of Casper, or even Scooby Doo, and that takes away from their credibility as a potential threat. As for ghosts demeanor they come off quite bland, and as if they are bored, but at least they did have detail, and didn’t end up looking like the generic “bed sheet” ghosts from cartoons of yore.

The meshing of the background art, the color palette that was chosen makes the whole thing come to life, and it works really well. Once they make a break from Police station and move into the woods, the trees seem to come to life, they are much more appealing to the eye than bricks, and filing cabinets.

I AIN’T AFRAID OF NO GHOSTS

Like I said before I hadn’t read Witcblade in many years, and for this be to be my first step back into that world it could gone horribly wrong, but in fact it was a nice stroll down a spooky memory lane. The story held together in the end, and was very entertaining, something that all comics should strive to be. Ron Marz knows his field well, and it’s good to see that even though I never heard of this character Detective Gleason, I was able to become engrossed in the story he was in.

While ghosts didn’t have the fearsome, and or creepy visage that I hoped for, the artwork is pleasing to the eye, and really works well in a supernatural environment. The character designs were not flat, and had a crispness that caught my eye, they flowed into one another, with great ease, and I greatful for that.

Overall, this is a pretty good comic, and much better read with issue #142, since starting at the end isn’t really the most recommended place to begin.
Final Verdict, Witchblade #143 receives 4 Stars, out of 5.